May is right around the corner, well in a couple of months, and Spring and warm weather will be here finally.  So will be another month of comic books from Valiant Comics.  I'm looking forward to them as Valiant's books are some of my favorites and the storytelling is top notch.

VALIANT FIRST begins in force this May with an all-new vision of the future in RAI #1 – a new monthly series from comics superstars Matt Kindt and Clayton Crain!

The year is 4001 A.D. – led by the artificial intelligence called “Father,” the island nation of Japan has expanded out of the Pacific and into geosynchronous orbit with the ravaged Earth below. With billions to feed and protect, it has fallen to one solitary guardian to enforce the law of Father’s empire – the mysterious folk hero known as Rai. They say he can appear out of nowhere. They say he is a spirit…the ghost of Japan. But when the first murder in a thousand years threatens to topple Father’s benevolent reign, Rai will be forced to confront the true face of a nation transformed…and his own long-lost humanity…

For Valiant’s dedicated pullbox customers, celebrate the launch of VALIANT FIRST with a special expanded edition of RAI #1, featuring more than 15 pages of in-story bonus features and dedicated looks inside the world of 4001 A.D. that won’t be collected for the trade paperback!

Retailers please note: this item will come polybagged and will be limited to initial orders only.

VALIANT FIRST delivers another must-read milestone this May with a blockbuster, 48-page celebration of X-O Manowar’s 25th issue…and an essential introduction to the comic book event of 2014 – ARMOR HUNTERS!

Find out why the galaxy’s most feared team of hunter-killers have journeyed across the stars to destroy the X-O Manowar armor and the Earth along with it in ARMOR HUNTERS: PART ZERO by Robert Venditti and Diego Bernard. Then, revisit the roots of Aric of Dacia’s transformation from Visigoth conqueror into the 21st century’s alien-armored guardian, as told by Robert Venditti and J.G. Jones! Plus, all-new tales of X-O Manowar from Peter Milligan & Bryan Hitch, Justin Jordan & Rafer Roberts, and much, much more!

His whole life, Obadiah Archer has been lied to about his true heritage – but when he and his pal Armstrong arrive in L.A. to meet his real parents, they find them in the clutches of the CHURCH OF RETROLOGY! What insidious plans does THE LIZARD KING, the head of the favored religion of the Left Coast’s rich and famous, have for the Valiant Universe’s premier conspiracy busters? And what lurks in the Hollywood Hotel? (Hint: You can check in anytime you like, but you can never leave!)

The return of Master Darque!

Only one man can help Shadowman now…his worst enemy! Forced to confront the greatest shock of his lifetime, Jack Boniface speeds down a self-destructive spiral he may never recover from. Exterminating the wild and evil loa spirits that haunt New Orleans at any cost, Jack has left himself with nothing to lose…in this world. By crossing the veil into the dark world beyond – the Deadside – will Jack save his own soul…or destroy himself?

The final deathtrap of Dr. Silk!

Ninjak’s ultimate enemy has drawn his web tight around X-O Manowar and the rest of Valiant’s unbreakable all-star superteam…and now they’re about to find out how the globe’s most brilliantly depraved mind doles out revenge. “Trapped by Webnet” cuts to an action-packed conclusion…and no one will escape Dr. Silk’s grasp unscathed!

The one-man army known only as Bloodshot is forced to turn his guns on his own people! Project Rising Spirit, the private military organization that created Bloodshot, enlisted him to fight on their side – and Bloodshot, seeking his own secret justice, agreed. Now his agenda comes to light, and Bloodshot turns around to destroy Rising Spirit once and for all…but he has to go through Major Palmer and his own ragtag team of men and women to do it! Our hero versus our heroes in a bloody battle with life-or-death stakes to save or destroy an evil corporation…and whoever wins…everyone loses!

Quantum and Woody – against the world…or against each other?!

Woody always had a weakness for the ladies…and when an old flame lures the goofus into a gang of mad-science super-crooks, Woody flips back to his old lawless ways! Where does this leave Woody’s sweet clone girlfriend? And now it’s up to his own brother Eric, who isn’t that sure he even wants to be a superhero, to bring Woody in! Don’t miss this bro-down for the ages!

When a troubled young man with a history of violence and a penchant for blackouts meets an overwhelming source of power with a mystical scythe, the results are doomed to be destructive. A voodoo loa has possessed Jack Boniface – or so he believes. But after Jack awakens in an alleyway covered in blood, he embarks on a journey across lands of shadows and death to discover if he can expel the dark force that’s seized control of his life…and which may be responsible for a violent rampage throughout New Orleans… 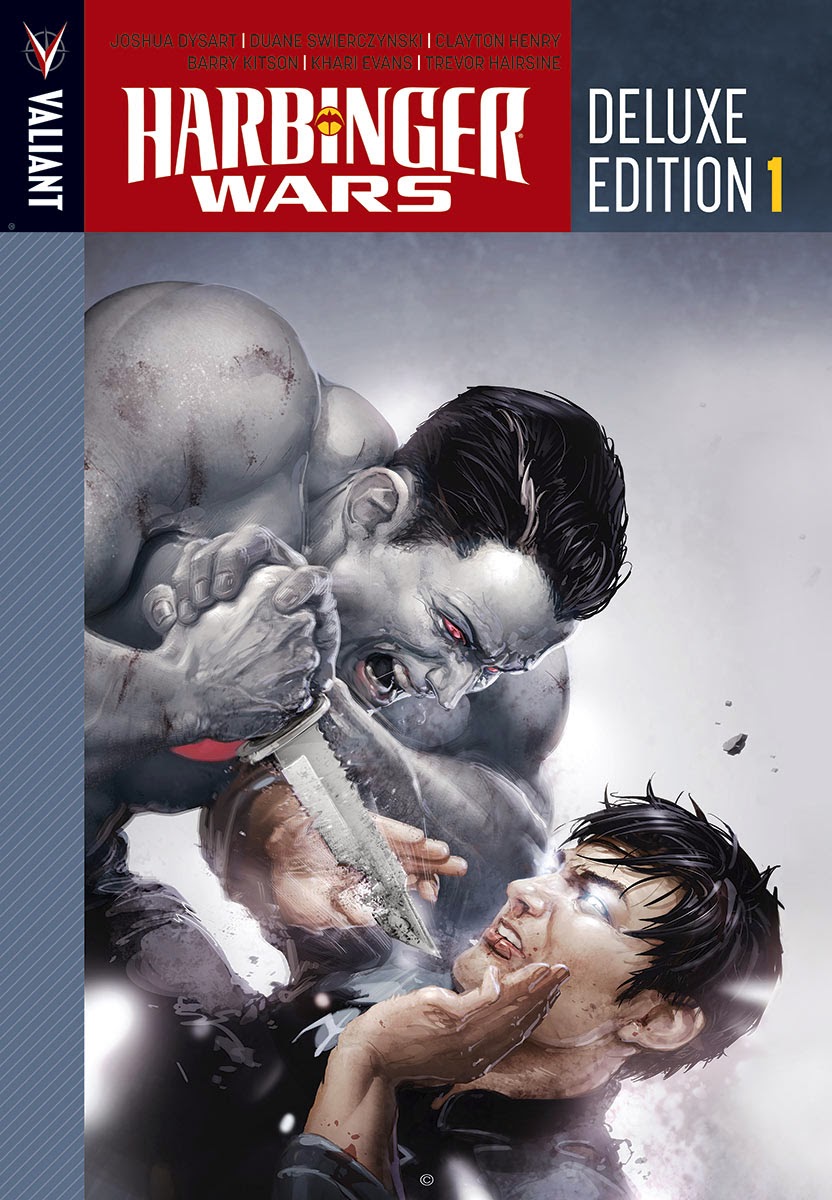 When an untrained and undisciplined team of super-powered test subjects escape from Project Rising Spirit and onto the Vegas Strip, Bloodshot and the Harbinger Renegades will find themselves locked in battle against a deadly succession of opponents – and each other. As the combined forces of the H.A.R.D. Corps, Generation Zero, and omega-level telekinetic Toyo Harada all descend on Las Vegas to vie for the control of Rising Spirit’s deadliest assets, the world is about to discover the shocking price of an all-out superhuman conflict…and no one will escape unscathed. Who will survive the Harbinger Wars?

Collecting HARBINGER WARS #1-4, HARBINGER #11-14, BLOODSHOT #10-13 and material from the HARBINGER WARS SKETCHBOOK, the Harbinger Wars Deluxe Edition HC is the only place to find the complete story of the groundbreaking crossover that IGN calls “one hell of a ride.”