Doctor Who - Details For The War Doctor: Infernal Devices 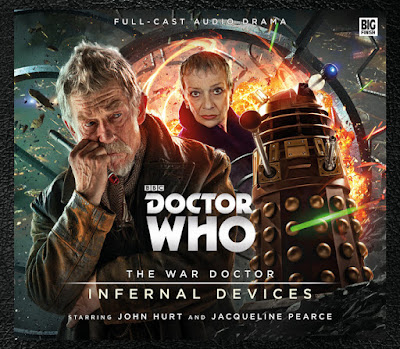 The War Doctor returns this month with another Time War adventure.  This four disc set can be ordered from the Big Finish website.
http://www.bigfinish.com/releases/v/the-war-doctor-volume-02-infernal-devices-1381

2.1 Legion of the Lost by John Dorney

In a time of war, every means of victory must be explored. In the Time War, the unthinkable must be thought, and neither side can afford to be squeamish about their methods.

When the destruction of an obscene weapon leads to the Time Lord once known as the Doctor uncovering a secret Gallifreyan initiative, he cannot believe what is being considered.

Should victory be sought at any cost? Or are there worse possibilities than losing to the Daleks..?

2.2 A Thing of Guile by Phil Mulryne

The Daleks are developing a secret weapon on Asteroid Theta 12. It is imperative that their plans are uncovered.

Cardinal Ollistra has her hands full studying the range of ancient and mysterious armaments the universe has to offer, but she makes it a personal mission to investigate the Dalek project.

On this dangerous assignment, there is one particular Time Lord she wants at her side - and he will be accompanying her whether he wants to or not.

2.3 The Neverwhen by Matt Fitton

On an isolated world ravaged by battle, time itself has become a weapon, laying waste to all who live and die there. Arms and technology are in a state of flux – and it seems that everlasting war is their only option.

The arrival of one battered Type Forty TARDIS inside this nightmare offers hope to the combatants trapped within.

But when he discovers the truth, the horrors of the Neverwhen will shock even the War Doctor…