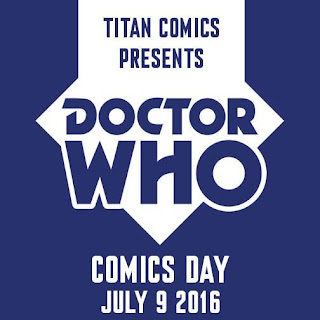 Doctor Who comic book publisher Titan Comics has announced the third Doctor Who Comics Day. Last year that day was used for the special Four Doctors story-line event.  No news has been announced yet on what they plan to release in July but it sure will be something fantastic. So make sure to keep July 9th open to be at your local comic book store.

Titan Comics is pleased to announce this year's global Doctor Who Comics Day event will take place on SATURDAY, JULY 9, 2016.

Doctor Who Comics Day is a global event inspired by Titan Comics’ Doctor Who comic books. In its third year, the event is set to be even bigger with new comics and collections, signings and events across the globe.

2015’s event tied-in with a special, brand-new, five-part weekly Doctor Who comics cross-over series by Paul Cornell and Neil Edwards, and saw comic readers get the chance to celebrate Doctor Who Comics Day at over 2900 locations including comic shops, bookstores, retail chains and libraries.

“We’ve got some great things planned for this year’s 2016 Doctor Who Comics Day event,” said Ricky Claydon, Direct Sales & Marketing Manager at Titan Comics. “As well as working closely with stores and libraries to develop events for the day, for 2016 we’ll be supplying Doctor Who fans with event kits to hold their own reading group events.”

More details about this year's 2016 Doctor Who Comics day event will be released soon.