Doctor Who - Details For Aquitaine 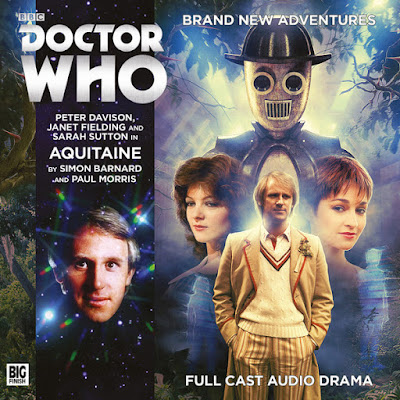 This months main range release sees the 5th Doctor Tardis crew investigating what happened to the Aquitaine but it appears that there might be some ghosts about to disrupt their investigation.  You can get this release from the Big Finish website.
http://www.bigfinish.com/releases/v/aquitaine-1048

Today should be much like every other day for Hargreaves, the computer consciousness that co-ordinates daily life aboard the spaceship Aquitaine, stationed on the outer fringes of a black hole. Water the plants, run the diagnostics, cook the Captain’s breakfast; then tidy the plates away, rotate the ship, clean the windows of the observation deck. When at last the day’s work is done, Hargreaves will dim the lights in the sleeping quarters. But no-one will sleep aboard the Aquitaine tonight. Because the Aquitaine’s crew is missing.

But today will be different. Today, a space/time ship called the TARDIS will materialise in the botanical section, bringing the Doctor, Nyssa and Tegan aboard the Aquitaine. Together, they’ll seek to discover the truth of what happened to Hargreaves’ crew…

… if only the ghosts will let them.