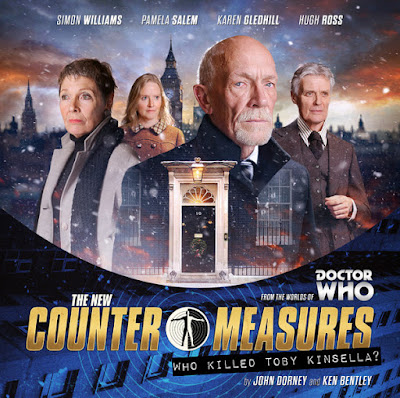 Counter Measure returns and the series sees a makeover as Big Finish tries something new with the series.  A brand new adventure from the group that debuted in Remembrance of the Daleks.  You can order this release from the Big Finish website.
https://www.bigfinish.com/releases/v/the-new-counter-measures-who-killed-toby-kinsella-1388

A special feature-length release, forging a new era for Counter-Measures!

It’s Christmas 1973. Nearly ten years have elapsed since the Counter-Measures group vanished. Only one of the remaining members is officially alive. But that is about to change.

When Sir Toby is killed by an enigmatic assailant, his friends fly in from around the globe to attend the funeral where they discover that the truth of their colleague’s murder lies hidden in his past.

A dangerous killer is out for revenge. A terrible assassination is planned. When ghosts walk the street, there’s only one team you need.

Executive Producers Jason Haigh-Ellery and Nicholas Briggs
Posted by DR5WHO at 5:00 AM