Doctor Who - Details on The Pursuit of History 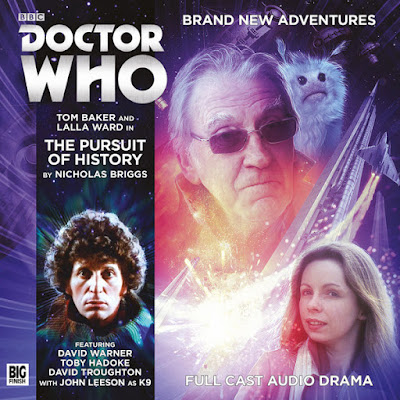 This month's 4th Doctor adventure sees The Doctor and Romana in Yorkshire where The Doctor sees a familiar foe. This is part one of two and will be continued with Augusts release. You can order this story from the Big Finish website.
https://www.bigfinish.com/releases/v/the-pursuit-of-history-999

On a brisk winter’s morning in 1850s Yorkshire, Cuthbert, head of the intergalactic business known as 'The Conglomerate' prepares to hijack a very special train.

In the far future, his assistant, Mr Dorrick is awoken by howling alarms. There is a problem with the Quantum Gateway.

In the TARDIS, the Doctor, Romana and K9 detect strange distortions in the Vortex, an energy stream coming from a strange creature called a Laan.

The threads of a plan centuries in the making are coming together. But who is behind this plan? And can anyone possibly escape when history is against them?

Note: The adventure continues in Doctor Who: Casualties of Time

Listeners may like to refer to the following releases for story and character background that will enhance the enjoyment of this release: The Sands of Life, War Against The Laan, The Dalek Contract and The Final Phase.