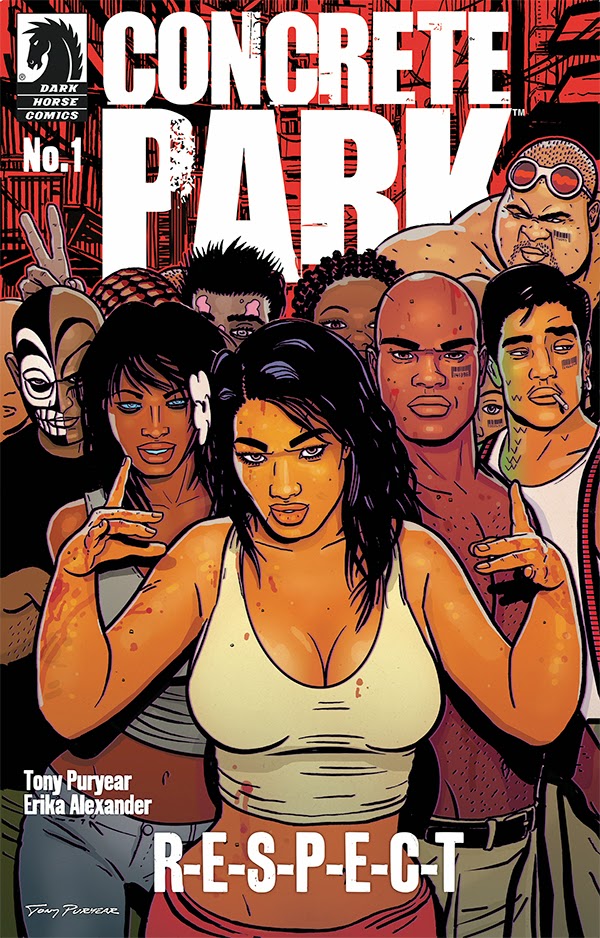 When young Earth outcasts are exiled to “Scare City,” a vast outpost on a distant desert planet, they must find a path to redemption or be destroyed by their own violence. Concrete Park, a dark, sexy sci-fi saga by Tony Puryear (screenwriter of Eraser) and Erika Alexander (Living Single), is filled with unforgettable protagonists, a colorful supporting cast, redemption, romance, and nonstop action presented in an exceptional, vibrant style.


Concrete Park Volume 1: You Send Me collects the critically acclaimed graphic novel from the pages of Dark Horse Presents into a “director’s cut” hardcover featuring new pages and bonus materials!
The new miniseries, Concrete Park: R-E-S-P-E-C-T will debut September 3 as the first of five single-issue comics, sure to mix stylish noir with sci-fi twists!

“The visuals on Concrete Park are a highly graphic style that is incredibly appealing.”—Comic Book Resources

“Puryear’s thick, heavy inks are striking, forming his characters with a great deal of confidence and force. Through his art, you instantly get a feel for this near-future [city]; the swagger of his characters and their surroundings just bursts off of the page.”—Read About Comics

“Every time I think I know what is going on in Concrete Park, Puryear throws me for a loop. I have to read more.”—Comics Bulletin

Concrete Park Volume 1 is on sale October 1! Preorder your copy today!
Posted by DR5WHO at 1:00 AM