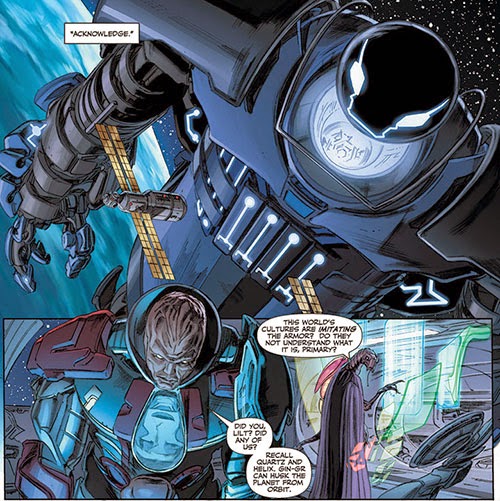 Retailers will be eligible to “Unlock Chromium” based on their orders of ARMOR HUNTERS #1 (of 4), UNITY #8, X-O MANOWAR #26, ARMOR HUNTERS: BLOODSHOT #1 (of 3), and ARMOR HUNTERS: HARBINGER #1 (of 3). After “unlocking” each separate title, qualifying retailers may order as many Chromium editions of the corresponding title as they like. Retailers be advised: due to the lead time needed to manufacture this special cover process, print runs for all five ARMOR HUNTERS CHROMIUM EDITIONS have already been set. Supplies are robust but limited, and allocations may occur. If allocations do occur, they will be made based on initial orders.

In 2014, there are six new reasons to read Valiant FIRST! All summer long, Valiant will be rocketing to the top of your read pile with VALIANT FIRST – an all-new initiative unleashing a major #1 issue each month from May onward by some of the most talented creators in comics. RAI #1 in May. ARMOR HUNTERS #1 in June. ARMOR HUNTERS: BLOODSHOT #1 and ARMOR HUNTERS: HARBINGER #1 in July. THE DELINQUENTS #1 in August. THE DEATH-DEFYING DR. MIRAGE #1 in September. A combination of new ongoing titles, unprecedented crossover collisions, and high-profile mini-series, these are the titles that will have you reading VALIANT FIRST when you head home from the comic shop!
Posted by DR5WHO at 2:00 AM

Email ThisBlogThis!Share to TwitterShare to FacebookShare to Pinterest
Labels: Valiant