Doctor Who - Season 13 40th Anniversary: Terror of the Zygons Review 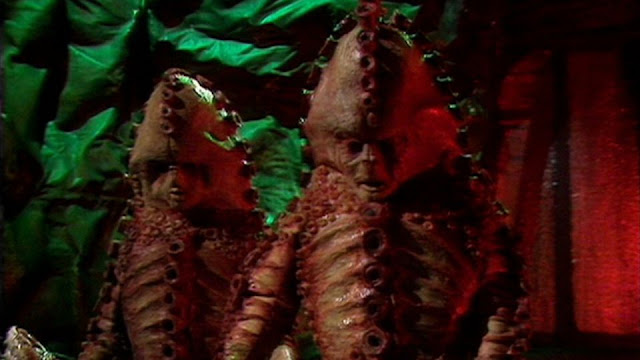 Yesterday was the 40th anniversary of the beginning of Tom Baker's second season as The Doctor. Season 13 had a lot of memorable stories and not a weak one in the bunch.  It gave us one of the more popular villains that have only just recently made a comeback and will be featured in Series 9 with Peter Capaldi. Here is what we thought of Terror of the Zygons.

Doctor Who:
Terror of the Zygons
By Robert Banks Stewart

“This one they call the Doctor is a threat to us. Already he has found out too much. He must be destroyed.”

Responding to the message from The Brigadier from the space/time telegraph he left him The Doctor, Harry and Sarah find them in present day Scotland.  Apparently something is destroying oil rigs off the coast of Scotland and causing alarm as these rigs are huge and supposedly are unsinkable.   The Doctor examines some of the wreckage that has washed ashore and found one particular piece of steel interesting.  After using some plaster and making a mold The Doctor shows The Brigadier that the mold is of a giant tooth.  What makes it impressive is that whatever is the owner of the tooth is strong enough to eat through steel as if it was paper. 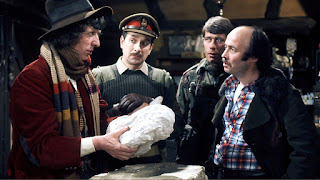 There are strange things going on around the inn that UNIT is using as a base when Harry finds on of the oil riggers workers have come on shore they are both shot at killing the worker and grazing Harry on the head.  Sarah does some investigating in the town and then informs The Doctor that Harry has been shot and goes and sees if he is ok at the infirmary at the Oil Company’s buildings.  While there Harry starts to regain conscious Sarah goes and calls The Doctor. Sarah is telling him what Harry has been mumbling when she is attacked by an alien creature.  It is a Zygon and they want to turn the Earth into a new home world for them to replace theirs which it was destroyed.  So it’s up to The Doctor and UNIT to prevent this from happening and to find a way of stopping the Zygons and the Skarasen.

Terror of the Zygons is considered by many fans to be one of those all-time classic Doctor Who stories.  There has been a love affair with The Zygons and they constantly are on top of the polls for a return in the new series.  After watching Terror of the Zygons and seeing how little that they do it makes me wonder why the fans would want them back.   But you have to admit they look pretty cool and do have a unique power of changing their appearance to look like us while using the person they kidnap as a pattern. 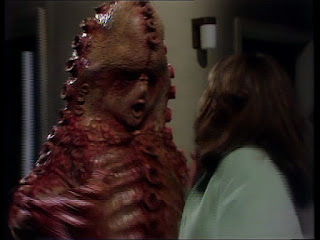 The story is pretty solid and very entertaining. There is not a lot of action in it but just enough to keep it from being sterile in that department.   What I like best about Terror of the Zygons is that it is a classic monster story and it has a bit of the charm from the Third Doctors era.  By that I mean it is a UNIT story and it so could have fit in the Pertwee era.  Nicholas Coutrney and John Levene both return as Sgt Benton and of course The Brigadier and what would be the last time they would be together on Doctor Who.

What I liked about Terror of the Zygons besides that it was a pretty good monster story was that it had a scary atmosphere to it. It did have a scary feel and that was a trademark of the Holmes and Hinchcliffe era.  I loved how they incorporated the Loch Ness Monster into the story using the Skarasen as the famous monster. I liked how The Zygons were always two steps ahead of The Doctor and had that camera in the eye of the deer.  I thought the way the Doctor had to deduce what is going on felt like a mystery story with a science fiction twist to it.  I love that aspect of it as it gives Doctor Who a Sherlock Holmes feel to it.

I do like The Zygons and the fact they can change their appearance.  That gives Terror of the Zygons a feel of paranoia because you do not know who could be a Zygon.  I do like the Zygon spaceship.  It looks all slimy and the controls look like huge mushrooms.  It is pretty neat and for once they spent some money on a spaceship set to make it look different. 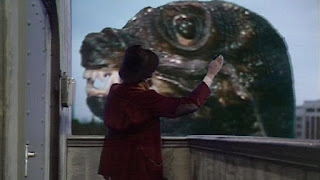 Terror of the Zygons has gone down in Doctor Who’s history as an all-time classic.   I like this story but not really for the Zygons as they don’t really do much except look cool and walk outside in human form.  The story is notable as it is the last time Harry travels in the TARDIS as he stays on Earth at the end. He does return in The Android Invasion but he is no longer a traveling companion.   Terror of the Zygons is the last true UNIT story and I wished they made more but the show was waning away from that era.  Terror of the Zygons got season 13 started off on the right track and in fact started off a really good season of stories.
Grade A