Doctor Who - The Secret History Review 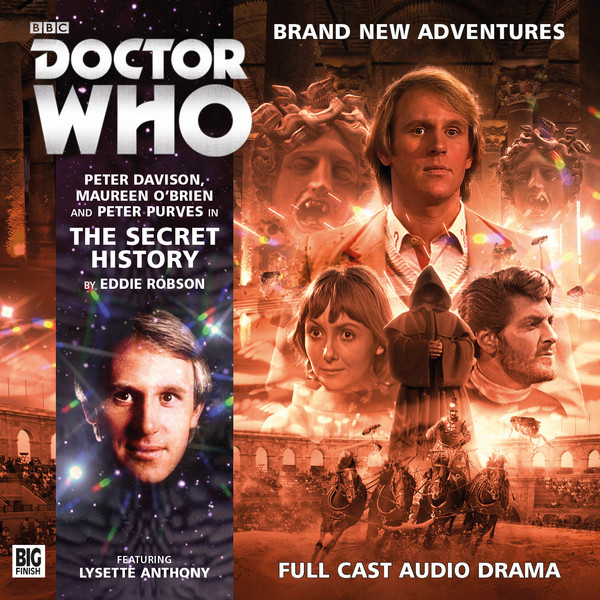 The Doctor finds himself in a TARDIS control room that he hasn’t used since he was in his first incarnation.   In fact the 5th Doctor is now looking at a couple of companions that he hasn’t seen for a very long time.  He is now facing a startled Vicki and Steven who have no idea where there Doctor has gone and who this younger man standing before them is.   The Doctor is also hesitant to leave the TARDIS because of the ramifications of what would happen but curiosity got the better of him and off they go outside of the TARDIS.   Outside is the Italian city of Ravenna in the year 540 and it is besieged by the highly decorated General Belisarius.

When fighting starts The Doctor and Vicki are separated from Steven.   As it turns out rescuing Steven will be harder than expected as Steven was put on a boat to Constantinople.  Meanwhile The Doctor and Vicki are granted an audience with   Belisarius and find themselves on a boat for Constantinople and once there The Doctor is arrested for being a spy.   Vicki tries to get The Doctor free including appealing to the Emperor himself but to no avail.   But things don’t appear to be what they seem.  Giant floating alien heads have appeared and seem to be targeting the Emperor and his wife.  When Vicki tells The Doctor this they are surprised that he is being released as his imprisonment was a mistake.  The Doctor will soon find out the alien presence in Constantinople is the least of his worries as an old enemy is revealed. One of The Doctor’s enemies who has been responsible all the time for The Doctor’s time displacement and can finally see victory within his grasp.

I really liked The Secret History.  Yes it is a semi historical and I generally do not like stories like this especially so far back in the past but Big Finish was able to make it work in this setting and it came out really good.   I really liked the pairing of the 5th Doctor with Steven and Vicki as it seemed like they have been together for a while and if you didn’t know it you would have sworn that they were this Doctor’s companions.  The chemistry really worked and it had the feel of a 5th Doctor story more than a 1st Doctor story as that was the era they were trying to recreate.  Since Steven was more a less the companion that was captured and then injured, a 1st Doctor Era staple, he didn’t have much time with The 5th Doctor after part one.  However this opened up a lot of time for Vicki to be the main companion and to have a majority of the time with The Doctor.  One of the good things of the audios is that they can expand on the character and this benefits Vicki a lot.  She is given more to do and doesn’t come across as the helpless child as she does on TV.   In The Secret History we see Vicki take some initiative and tries to get The Doctor free from jail instead of finding Steven and asking his help.  I really like the audio version of Vicki better than the TV version.

We finally get the reveal of who is the main bad guy that has been manipulating The Doctor’s timeline. In fact it is an enemy from the 1st Doctor era who has been used multiple times by Big Finish The Monk.  The Big Finish version of The Monk is actually pretty good and a lot cleverer than the one featured on the TV.  He has his own companion also that helps in his meddling which makes him even more dangerous.   Using The Monk as the protagonist was pretty clever as I had not suspected him of being the one taking The Doctor out of his time stream and placing him in one of his earlier time streams.  I had completely forgotten all about him and bravo for Big Finish for bringing him back again.  In fact I hope they bring him back against the 5th Doctor as it sounded pretty good hearing the two Time Lords matching wits.

I’m not usually a fan of the historical setting for Doctor Who even if it is not really accurate as they can tend to be a bit boring and there isn’t much science fiction involved.  But The Secret History was anything but boring as it did have a good blend of science fiction mixed in especially with the last two parts.  I really enjoyed part four the best and to hear how The Doctor would escape from his predicament.  I won’t give that away but it was pretty clever and I one that wasn’t predictable.  You have to hear it for yourself as I have given too much away already by revealing The Monk.

The Secret History wraps up this multi Doctor trilogy for the 200th release in the main range of Doctor Who audio adventures.  Can’t believe it has been 200 already as it seemed just yesterday that The Sirens of Time was released.   The trilogy was a pretty good listen with The Secret History being the best of the bunch. The Secret History is a great story that leaves you guessing and entertains you for the whole two hours.
Grade A