Doctor Who - Last of the Cybermen Review 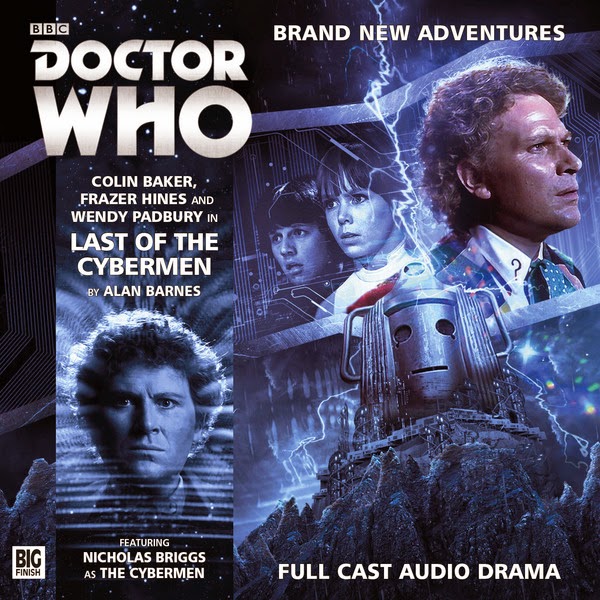 Jamie and Zoe are waiting in the TARDIS for The Doctor to return.  The scanner shows a rocky landscape and it is dark and it is hard to make out images clearly.  They see a shadow of a man running and it is the familiar shape of The Doctor.  Jamie and Zoe leave the TARDIS to help him when they noticed that he fell in a ditch.  When they get to the ditch the notice the man who fell down it is not the man they were expecting.  It is indeed The Doctor but it isn’t their Doctor as in the place of the 2nd Doctor is the 6th Doctor.

That is the least of their troubles as before the 2nd Doctor disappeared he was being chased.  What the three travelers notice was that a Cyberman was chasing them and that the planet the 6th Doctor is now on is Telos.  It is at the end of the Great Cybermen War and the trio must face the Cybermen once again.

Last of the Cybermen gave us another pairing of different companions and Doctors as this time the 6th Doctor is paired up with Jamie and Zoe.  This was a pretty good pairing and worked a lot better than the previous release which saw the 7th Doctor paired with Jo Grant.  This time Jamie and Zoe were more trusting and did not have much of a problem with a different Doctor like Jo was.  It took them awhile but in the end the treated him like he was their Doctor.

I liked Last of the Cybermen but I did have some problems with it.  I could not stand Lanky the Cybeman and the way he talked.   He sounded like a really bad impersonation of someone from the U.S south mixed in with an obnoxious DJ.   It was terrible and so annoying that It detracted from the enjoyment of the story for me.  Plus mix in the metallic robotic voice sound of a Cyberman and it was just nerve wracking.   Needless to say I did not like it very much.

I also thought it got quite involved towards the end.  Lots of stuff going on that made it hard to follow.  At times the story took place in the past with The Doctor and Zoe and in the present with Jamie.  There were times that I lost track of what was what and at times The Doctor was with Jamie talking about the Time Lords and getting ready to ask for their help with one of the cubes.   Last of the Cybermen has a lot going so you really need to pay attention while listening to it or you might not comprehend how they defeat the Cybermen.  I do like the more complicated stories and I do like this one but even I was a little lost with what was going on.

I really liked the pairing of the 6th Doctor and Jamie and Zoe. If you haven’t been following along Big Finish is celebrating the countdown to their 200th Main Range release by doing something special by pair Doctors with companions from the first three Doctor’s era.  This pairing worked as the chemistry was really good.  This isn’t the first time they had this pair together they did it before in Legend of the Cybermen which came out in June 2010 which saw the Cybermen trying to invade the Land of Fiction.  Anyway the pairing work better in Last of the Cybermen as the trio were in the 2nd Doctor era and not as older versions of themselves like in Legend of the Cybermen.   It was good to hear them act out their charecters from that era and it proved why the Troughton era was one of the best in Doctor Who.   Even at an older age Frazer Hines and Wendy Padbury still captured the magic that made Jamie and Zoe such memorable companions of the Doctor and it’s been a good thing that Big Finish has a range for that era of Doctor Who in the Companion Chronicles and The Early Adventures.

I liked Last of the Cybermen better than The Defectors.  While the story was complicated in parts I really did enjoy it.  It had some great moments plus it gave you a what if with the pairing of Jamie and Zoe with the 6th Doctor.  I am looking forward to the conclusion of this trilogy and to find out who has been replacing The Doctor with a different in a different era.
Grade B