Doctor Who - Synopsis For Return to Telos 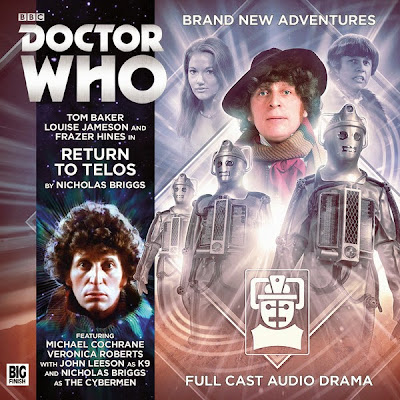 This months 4th Doctor adventures see The Doctor, Leela and K-9 heading to the planet of Telos. seems there is something that needs to be taken care of that he didn't do when he was there in a previous incarnation.  You can order this story with the Cybermen and guest star Frazer Hines as Jamie and the Second Doctor from the Big Finish website.
http://www.bigfinish.com/releases/v/return-to-telos-944

The Doctor reveals to Leela that they’re heading for the planet Telos. And K9 has new masters...

On Telos, in the past, the Second Doctor and Jamie are exploring the ‘tomb of the Cybermen’.

Meanwhile, the Cyber-Controller and Cyber-Planner consolidate their plans. Spare parts from Krelos are being used to construct a mighty Cyber army. The Doctor must be captured.

Out of control, the TARDIS tumbles down a chasm and the Doctor and Leela find themselves caught up in full-scale planetary invasion.