Doctor Who - Covers and Details For Early Adventures Series 3 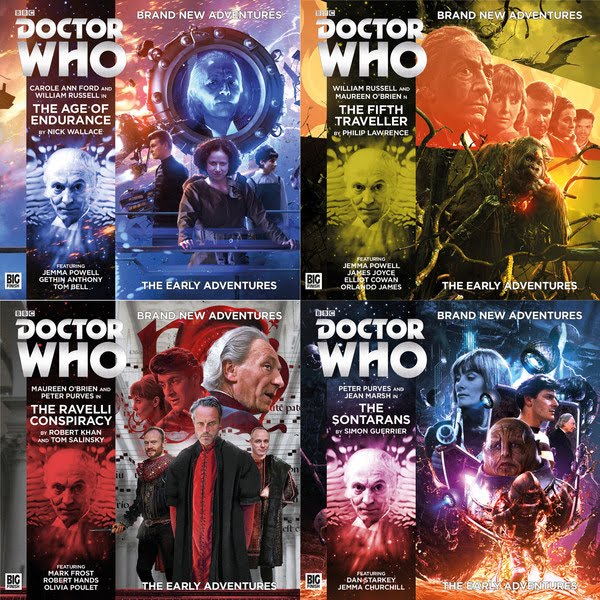 Doctor Who - The Age of Endurance

The TARDIS materialises on board a still and eerie spaceship. When a squad of soldiers land, they realise they've found themselves in the middle of a war zone. With one of their crew trapped by the enemy, the Doctor and his friends find themselves locked in a desperate race for survival. Vast warships manoeuvre around each other as both sides try to out-think their opponents, flying into ever more dangerous areas of space.

The stakes could not be higher. But as ever in war, the lines between good and evil are hard to define. Will anyone survive to claim the moral high ground?

Doctor Who - The Fifth Traveller

The Doctor, Ian, Barbara, Vicki and Jospa land the TARDIS on the homeworld of the Arunde. Emerging into the jungle that covers the planet and encountering the strange wildlife dwelling within, the travellers are unaware that the true rulers live high above them in the trees.

The ape-like members of the tribe are in trouble. The last Matriar's nest has been lost to the surface, and the people are hungry... Maybe these strangers may be responsible. And some believe they may be salvation.

The TARDIS crew are about to find themselves in the middle of somebody else's battle. But there's more at stake than even they can know.

Doctor Who - The Ravelli Conspiracy

When the TARDIS lands in a house in Florence, Italy in 1514, it isn't long before the guards of Guiliano de Medici arrest Steven and Vicki. To rescue them, the Doctor has to employ the help of the house's owner - one Niccolo Machiavelli. But can he be completely trusted?

Guiliano confesses to his brother Pope Leo X that he has angered the wealthy family of Ravelli and believes the newcomers may be part of an assassination plot. But when the Doctor arrives an already tricky situation starts to spiral out of control.

As the city rings with plot and counter-plot, betrayal and lies abound. The Doctor and his friends must use all their ingenuity if they're not to be swept away by history.

This conspiracy is about to get complicated..

Doctor Who - The Sontarans

The TARDIS crew encounter a dangerous race of clones, planning to drag the Solar System into an endless war.
Posted by DR5WHO at 4:00 AM