Details on Doctor Who - Absolute Power 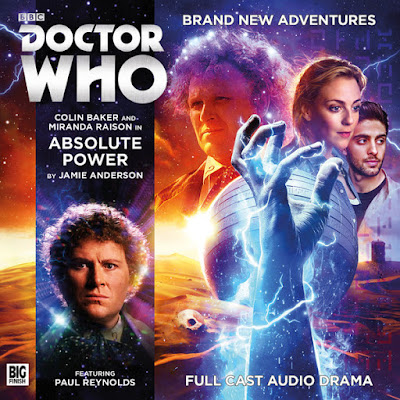 Out this month is the first of two Main Range releases featuring the 6th Doctor and Constance and for fans of Gerry Anderson this stort was written and directed by Gerry Anderson's son Jamie.  Absolute Power starring Colin Baker and Miranda Raison can be ordered from the Big Finish website.
https://www.bigfinish.com/releases/v/absolute-power-1058

Two thousand years ago, all civilisation on the planet Teymah was wiped out in an AELE – an Anomalous Extinction Level Event. Now, the galactic entrepreneur Lyam Yce hopes, at last, to learn the reason why the ancient Teymahrians went extinct – by funding a huge archaeological dig.

While the Doctor probes a strange sphere found by Yce's diggers, his companion, former Bletchley Park cryptographer Constance Clarke, agrees to help translate symbols written in the lost ancient language of the Teymahrians. And soon, they'll learn that ancient Teymah's secrets were best left buried deep beneath its shifting sands...