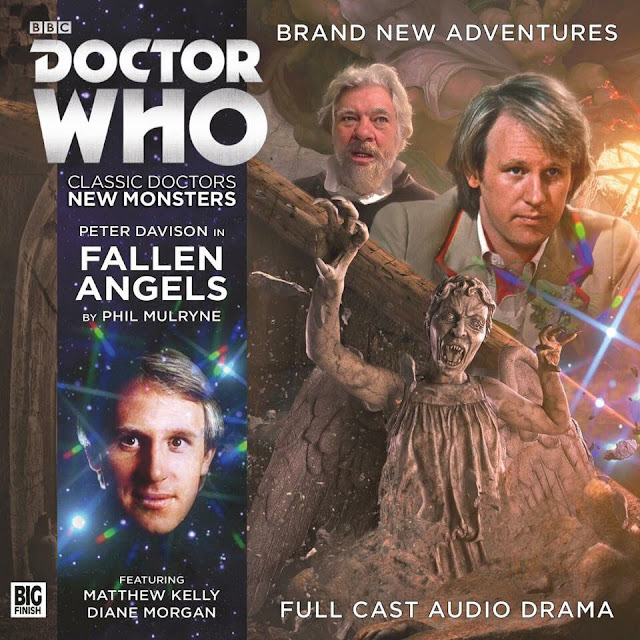 The story starts off in 2015 when two travelers on their honeymoon are looking at the sites in Italy when the stumble upon a mysterious statue and then boom it is now 1511 the time when Michelangelo is beginning to paint the ceiling of the Sistine Chapel. But he is being delayed because he has to finish carving a statue for a mysterious priest who is not a servant of God at all.   The 5th Doctor stumbles on what is going on and is horrified to discover that the Weeping Angels are involved and it is a race against time to prevent them from taking over.

Fallen Angels is one of four audio adventures that make up the Classic Doctors: New Monsters box set. If you haven’t guessed the Weeping Angels make their Big Finish debut and take on the 5th Doctor who is flying solo in this story.  So the role of companions goes to Michelangelo and the honeymooners Joel and Gabby.  This combination works well especially when it comes to the part of The Doctor explaining to the couple that they are no longer in 2015 and fortunately for them they have the more sympathetic Doctor breaking the news to them especially what their fate will be at the end.

When Big Finished announced this box set this story intrigued me the most of the four as I was curious as to how they would do the Weeping Angels on audio as they have not been known to be big talkers.  Well they did it very well as the sound effects they used from the series worked really well and the actors did a great job conveying the emotion of being frightened and shocked when the angels arrived or were on the way.  Big Finished did a really good job with the Weeping Angels that I would not be surprised if they make a return in other Doctor Who audio adventures featuring other Doctors.

Fallen Angel was a great story that was scary and full of intense moments.  The acting was really good and it was neat hearing and imagining The Doctor meeting Michelangelo.  Even though the ending was a bit of a downer I did enjoy it and it worked pretty well with the story. So far the box set of Classic Doctors: New Monsters has started off pretty good and I can’t wait to hear the other three stories.
Grade A