The Target Book - A History of the Target Doctor Who Books 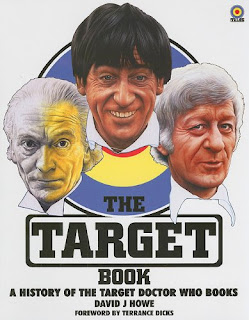 One of the first things I collected when I was getting into Doctor Who back in the early 80's was the line of Doctor Who novels by Target Books. It was all new. I had seen a bunch of Tom Baker stories and had read about some of the other Doctors. I grew hungry for Doctor Who and what better way to dine on the books. Very soon I had caught up with the releases and had to wait for new books to hit the stores. It was all very exciting especially since many of the novels where of stories I had not seen either because they had not aired in America or were of episodes that were “missing.”

This book is a very detailed look at the history of those Target books and includes information about the company and their decision to create a series of novels based on the actual episodes. We get a look at the many authors and artists involved with the series with color photographs of the covers and even some unused artwork. 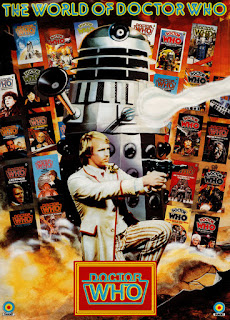 David J. Howe is an expert on Doctor Who and has done a great job compiling these details. In a way there is almost too much information and I found myself scanning quickly over some of the details on the authors and artists. One thing that annoyed me greatly was the fact that the photos were out of sync with the text. A chapter would mention something about a particular release and several pages later the cover would be depicted.

The book does have some great insight in the formation and evolution of Target and how the product attempted to work on new original stories, something that would eventually happen when the Doctor Who series was canceled.

I did enjoy the trip down memory lane as it has been years since I have seen some of these books from my collection. I had also forgotten about some of spin-off books and other non-fiction entries. Being A completist for the Target books it was good to see some of the later prints with different covers that I did not collect. I also found out that there was one hardcover book that had a different cover – how did I let that get by?

Another cool benefit of reading this is my discovery that there are hundreds of fan made Target covers for newer stories as well as stories that do not exists.  Also some of the alternate artwork is fantastic.

The book is full of info but I am not sure if this is a book I would ever read again. Maybe if I ever decide to re-read the line of novels again. It does have an excellent list and photos of all the covers in the Appendix. The book is sharp and well produced. If you were a collector of the Target books then it is a great book to have.
Posted by SHADOKP at 7:45 PM

Email ThisBlogThis!Share to TwitterShare to FacebookShare to Pinterest
Labels: David J. Howe, doctor who, Target Books, The Target Book - A History of the Target Doctor Who Books