Details For Doctor Who Magazine 511 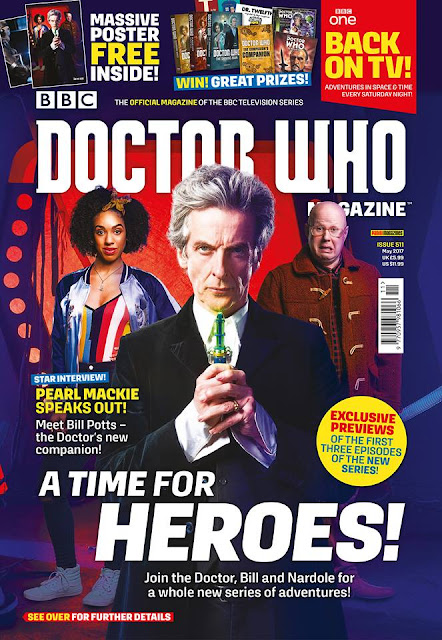 The new Doctor Who Magazine, out now in the UK, focuses on the new season with an issue devoted to the new series and they also will be giving you a new poster to hang up.  Full details below.

MEET PEARL MACKIE – THE DOCTOR’S NEW COMPANION –
IN ISSUE 511 OF DOCTOR WHO MAGAZINE!

In her most revealing, in-depth interview to date, Pearl Mackie tells DWM how it feels to be stepping on board the TARDIS as the Doctor’s new companion…

“Every day. I have about a million different emotions,” Pearl says of her fast-approaching, eagerly awaited Doctor Who début. “I’m excited. I’m nervous. I’m full of anticipation, really. Probably the same as most of the fans. Also, we’re still filming at the moment – we’re wrapping up the series so I’m trying to fit in all those emotions between, like, learning my lines. Which is fun. And a bit mad.”

Describing her character, Bill Potts, Pearl says, “Bill is very inquisitive, but she’s also very, very real and very human, so she does ask those kinds of questions – about him having two hearts, and where the toilet is in the TARDIS, and she says the TARDIS looks like a kitchen because it’s all shiny. She’s not, like, a sci-fi veteran. She likes sci-fi, but in her head it’s very ‘fi’; it’s completely fictional, and then she’s thrown into this amazing world where actually it’s all real and everything – anything – is possible. For something who’s human and 100% of this Earth, it’s completely mind-blowing.” 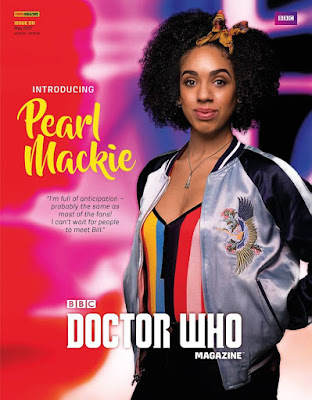 MEET THE TEAM FOR 2017!
In his exclusive column, showrunner Steven Moffat introduces the team of writers for the 2017 series.

NEW SERIES PREVIEWS!
Exclusive previews of the first three episodes of the new series: The Pilot, Smile, and Thin Ice, including interviews with the writers.

MEET THE PRODUCERS!
We get the lowdown on the new series from Doctor Who’s two producers, Peter Bennett and Nikki Wilson.

DOORWAY TO HELL!
Our brand-new comic strip reaches its climax in Part Four of Doorway to Hell, written by Mark Wright and illustrated by Staz Johnson.

THIS IS TERMINUS!
This issue’s Fact of Fiction explores the 1983 story which sees the Doctor arrive on Terminus, where suffers from Lazar’s disease go to die…

THE CURSE OF THE BLACK SPOT!
The Doctor, Amy and Rory board a seventeenth-century pirate ship, as the Time Team continue their mission to watch every episode of Doctor Who.

REVIEWS
DWM reviews the latest audio and DVD releases from the world of Doctor Who.
COMING SOON

Previews of all the latest Doctor Who CD and book releases.

PLUS! All the latest official news, competitions, the DWM crossword, and a FREE MASSIVE DOUBLE-SIDED POSTER!