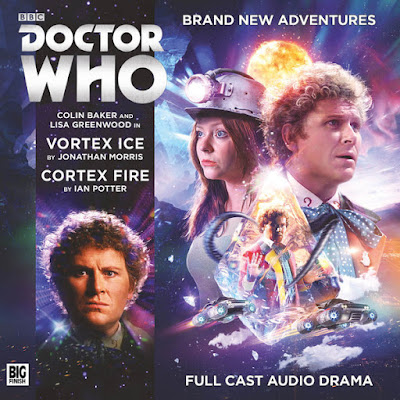 Out this month is a 6th Doctor audio adventure that features two stories with Flip as the companion. You can order this Main Range audio adventure from the Big Finish website.
https://www.bigfinish.com/releases/v/vortex-ice-cortex-fire-1255

In search of ‘exotic particles’, the Doctor and Flip arrive 700 feet underground, in a mine in Northern Mexico – only to run into a scientific expedition. Among their number, an exobiologist. They’re all on the hunt for alien life! Deep underground, the team finally uncovers a cave of vast crystals – like ice, despite the heat. And inside the crystal: something frozen. Something trapped in time. If only it were something simple, like a monster. But it’s far, far worse than that.

The Doctor brings Flip to the futuristic city of Festin, the best vantage point to witness a unique astronomical light show. In a city governed by the all-powerful network known as the Cortex, they’re soon identified as outsiders – nihilists, perhaps, responsible for a wave of terror that’s been sweeping the city… But the truth is different. The people of Festin are burning up. Spontaneously combusting. And no-one knows why.