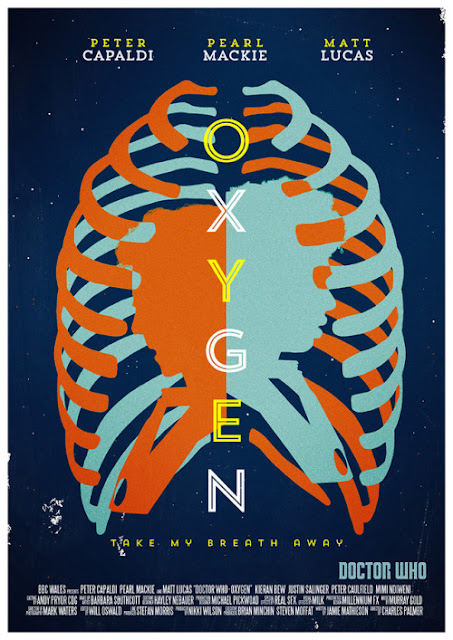 Doctor Who:
Oxygen
By
Jamie Mathieson

“Tell me a joke before you leave.”

Space Zombies, I’m not a big fan of zombie movie or even zombie television shows so when I saw the trailer for Oxygen I was a bit hesitant if I would like this particular story at all.  Well once I finished watching “Oxygen” that was not the case at all.  I really enjoyed it but not necessarily for the zombies; luckily they were not featured much, but for the overall message and what happened at the end. 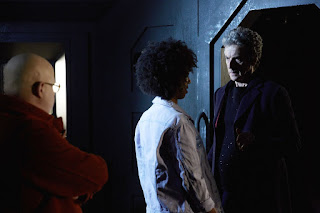 Here we have a story about cooperate greed as they deem that their workers are useless and cost them money.  In fact to help the cost production they make their workers’ pay for their oxygen.  Not only that but the corporation also has it that it is more cost efficiannt to have the spacesuits kill their occupants and do the work themselves without having to pay for the oxygen at all.  This is pretty evil and not at all surprising as big companies are always looking for a way to cut costs and to incorporate this type of scenario into a Doctor Who story is pretty brilliant and works really well in this format.

What I really liked is how vulnerable The Doctor is even before he loses his eye sight while saving Bill from suffocating in space.  He loses his sonic screwdriver early on and has to resort to using his wits to get out of the situation he is in and to save all the people that are left.   I really like it when the writer eliminates the sonic screwdriver from the story as I feel it is used to much and often is used as the solution to the problem.  But so far in this new series it has been used in limited capacity and that The Doctor has to use his brain just like he did in the Classic Series. 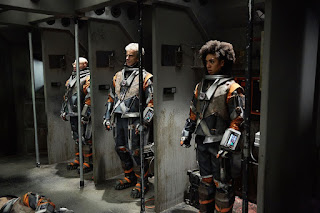 Now with him losing his eyesight and having to depend on others is something new and different that will be explored in more than in just this episode as it appears he will still be blind in the next story “Extremis”.  With him losing his eye sight I’m wondering if this has something to do with his upcoming regeneration.  They have been saying his regeneration is not traditional and I wonder if something triggers it to repair his eyes.  We have seen in the series trailer two scenes in which we see him in the regeneration yellow light.  But of course this could be nothing at all but a red hearing and I’m looking into things that are not there.  But that is the fun thing about being a Doctor Who fan and the way we speculate about the show. 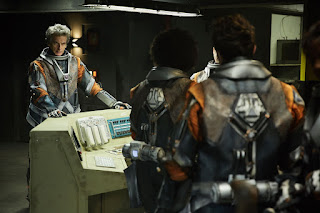 I have to say that Nardole didn’t grate on my nerves in “Oxygen”.  In fact he was pretty good and we sort of learn a little bit more about him.  We find out he was left in charge to make sure that The Doctor guards the vault and to not leave Earth.  We learn more about why as The Doctor made an oath and it appears it might have been a future version of The Doctor or perhaps that was just The Doctor being silly and rebellious to Nardole.  Anyway it will be all revealed in time and it will most likely not be what we expect.

Five stories in and I’m still loving The Doctor and Bill relationship.  It reminds me of The Doctor and Ace at the end of the Classic Series.  It is really good pairing and the chemistry between Peter Capaldi and Pearl Mackie is brilliant.  Plus the writing so far this series has been perfect also as that has helped in in the development in their relationship.  Let’s hope Moffat doesn’t screw it up later in the series. 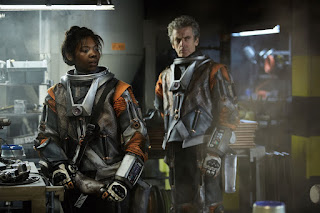 So far five stories in and the writing has been really good.  Series 9 I did not watch all the stories a second time.  I think I can count on one hand how many stories from the last series I have watched twice.  So far with series 10 I have watched the stories more than once and I really have been enjoying series 10 so far and Oxygen keeps that going as it was a really good story that also ends on a cliffhanger. Lots of good elements for Oxygen but the one thing that I could have done without is the suits being a bit too smart and the explanation of Bill not dying was a bit erratic and not really explained all that well.  So her air was low and not enough for a lethal dose but what about the other crew whose air was that low?  Guess they did not have the main character shield working. In all a really good episode that has kept the wave of good stories going.
Grade B+