Doctor Who - Attack of the Cybermen 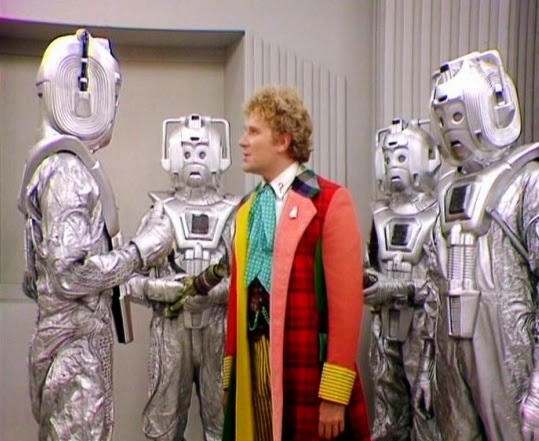 With the Cybermen returning this week The Gallifrayan Gazette decided to take a look back at some of the classic stories featuring the Cybermen. Today Attack of the Cybermen

Doctor Who:
Attack of the Cybermen
By Paula Moore

“Then perhaps you should tell them, because if you don't, they intend to prevent Mondas from being destroyed.”

The Doctor discovers that the Cybermen want to save Mondas but in doing that Earth must be destroyed.  The have the perfect weapon in doing it as Haley’s Comet is making its approach back to Earth.  The Doctor and Peri stumble upon their plan by searching out a distress signal which leads them to the sewers of London and a secret Cybermen base.   The Cybermen capture The Doctor and force him to pilot his TARDIS to Telos so that they can use his TARDIS in their plans to save Mondas.  On Telos is an old adversary of The Doctor as he finds out that The Cyber Controller is still alive.  There is also a wildcard in the mix as Lytton is involved in this also and The Doctor does not know if he is working for the Cybermen or the Cryons.  One thing The Doctor does know about and that is stopping the Cybermen and preserving the web of time by preventing Mondas from being saved. 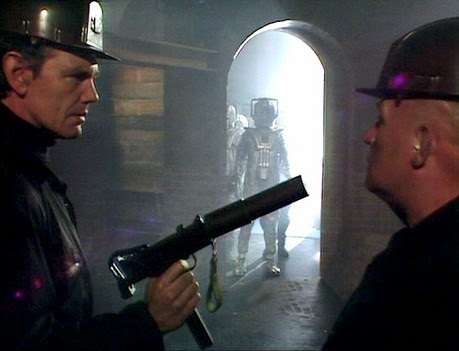 Attack of the Cybermen was considered by some at the time to be a sequel to The Tomb of the Cybermen.  Unfortunately it is nothing of the sort.  Yes there are elements from Tomb in this story but for the most part that is all.  We have the Cyber Controller, the tombs and the planet Telos but no one of the charm or scariness of the original.  For the most part Attack of the Cybermen is not the best Cybermen story ever made but I do like it and consider it a guilty pleasure.  It is not a well written story to say the least as there is quite a bit going on that just does not work out that well.  For instance Bates and Stratton were not needed really as they did not enhance the story.  They could have just used Griffins and Lytton to pilot the time ship and then just captured Lytton at the door when Griffins was killed.  That would have worked better and gotten rid of the scenes on the surface of Telos as they really did not enhance the story at all.

They also did not need to have The Doctor fix the chameleon circuit.  This was not a big deal or anything but did seem unnecessary as they could have had The Doctor just do regular maintenance.   Plus the whole Cryons just did not work for me.  They just seemed to be made of bubble wrap and walk along like they were ice skating.  I guess that was the point as they can only live in below freezing temperatures.  Plus the Cryons just did not work for me as they just weren’t developed well and I did not feel sorry for them having their planet invaded.  Plus I could not find it plausible that the Cybermen would really have any problem with them at all. 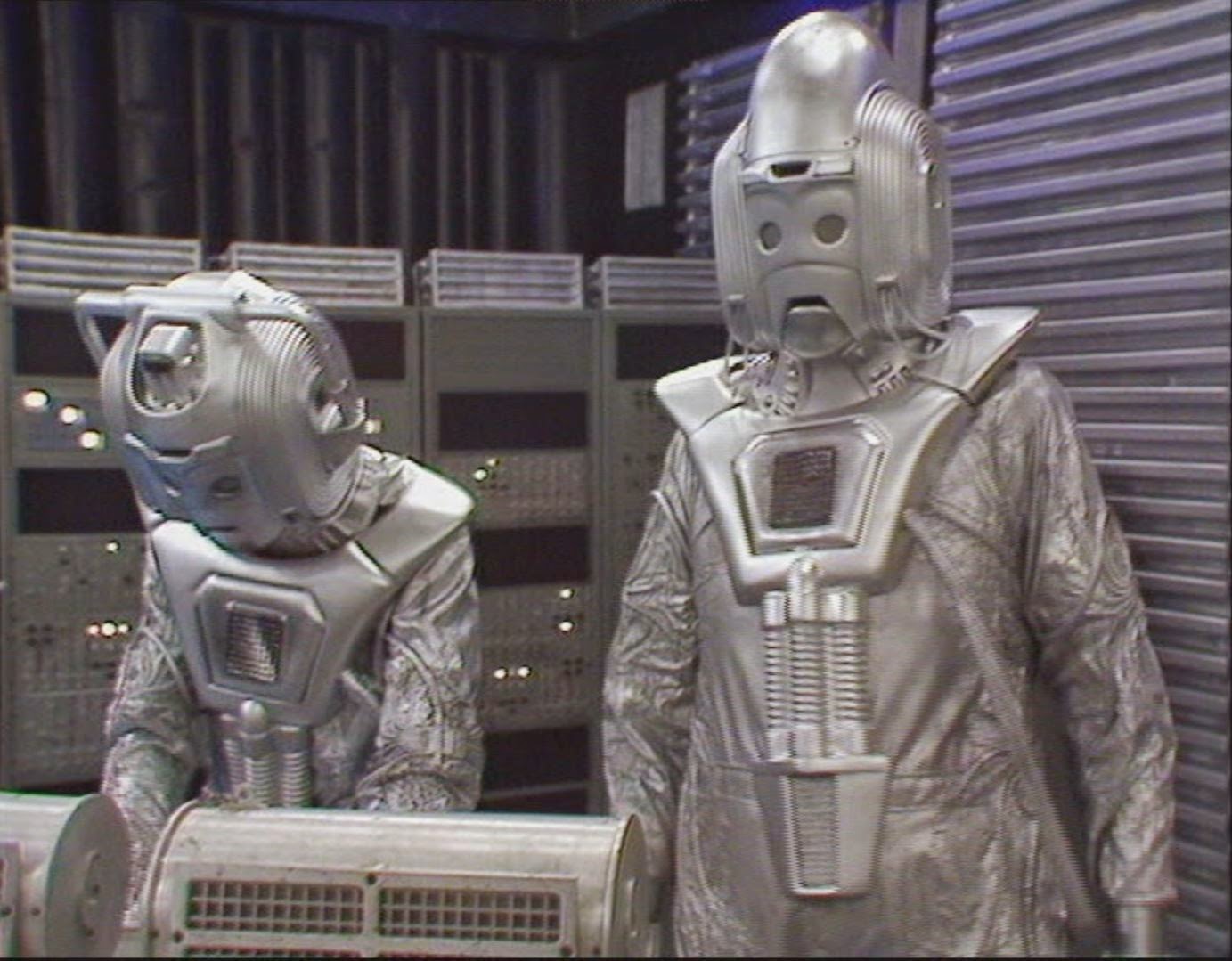 Why was the Cyber Controller so big and obese? Another of John Nathan – Turner’s great ideas that he thought was pretty cool was to cast the original Cyber Controller from The Tomb of the Cybermen Michael Kilgarriff.  Now it appeared that the Cyber Controller had hit the many Cyber Buffets on Telos and definitely hit the all you can eat ones.  Nothing against large people but it did not look good having an army of skinny Cybermen and then having a leader who was not of the same proportion just seemed wrong to me.  Plus his acting was way over the top and he walked more like a robot than a Cyberman.

Now I did say in the beginning that I find this story a guilty pleasure for me.  I do like this story even with all the faults that I have brought forth.  I think mainly that I enjoy this story for the parts in the sewers with the Cybermen skulking about in the dark.  It was pretty cool to see a stealth Cyberman all decked out in black so you could not see it clearly in the shadows.  That Cyberman is pretty cool and you can get a good look of it in the TARDIS at the end of part one and possibly we should see different kinds of Cybermen in the new series also instead of the same types all the time. 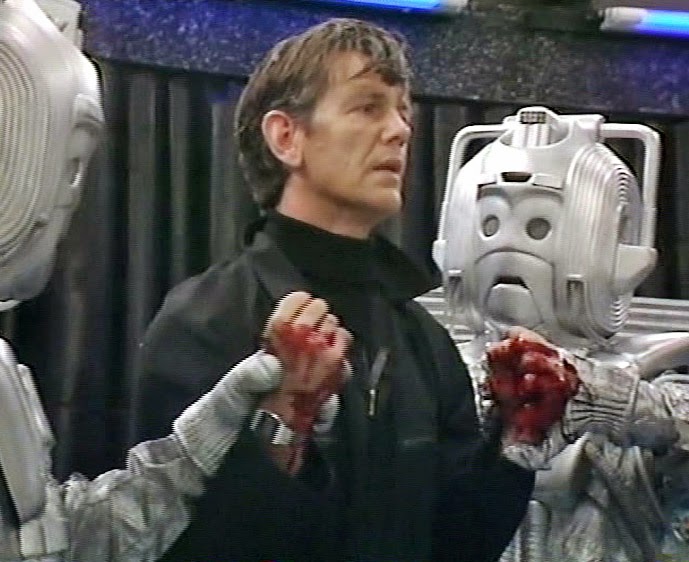 Attack of the Cyberman also has the distinction of being one of the stories that they cracked down on for being too violent.   For example when Lytton is captured by the Cybermen and is being interrogated by the Cyber Controller he refuses to answer and the two Cybermen holding him proceed to crush his hands.  You end up seeing blood coming out of his hands.  To make matters worse when the cut back to that scene you see Lytton on the floor hands still bloody but now you see blood stains on the floor.  Kind of gruesome for Doctor Who but something that was not out of the ordinary for Season 22 as that season was deemed too violent.  We also see The Doctor doing his best Punisher impersonation as he shoots down all the Cybermen and the Cyber Controller in the main control room as he attempts to save Lytton. Very non Doctor like and I can see where that could cause problems but it did fit in with the only solution as The Doctor was being threatened and attacked by all sides.

Attack of the Cybermen may not be the greatest Cybermen story ever but I do like it as Colin Baker gives a great performance and we also learn that The Doctor can be bull headed and not give someone a second chance. He does admit this at the end as he tells Peri that he misjudged Lytton and you can see the regret in his face.  I also enjoyed seeing the tombs again and seeing the Cybermen walking around in them.  It is not a well written story but it does have some fine moments to it and if you are a fan of the Cybermen you will enjoy this one as they are used a lot better in the classic series than they have been in the new series.
Grade C+

Email ThisBlogThis!Share to TwitterShare to FacebookShare to Pinterest
Labels: 6th Doctor, Attack of the Cybermen, colin baker, Cybermen, doctor who