Doctor Who - The Crawling Terror Review 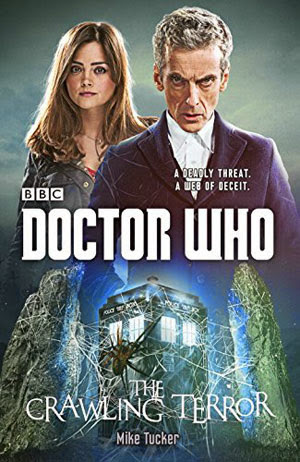 Doctor Who:
The Crawling Terror
By Mike Tucker

The Doctor and Clara arrive in the English countryside and come across something that just doesn’t fit with a day out in the country.    Giant insects seem to have taken over a small town and seem to be using the inhabitants as food.  From giant beetles to giant mosquitos and worst of all a giant spider seem to have the town in a frenzy.  What The Doctor and Clara are finding out if the mosquito bites you  you turn into a zombie and start menacing the town.

But that isn’t the only problem. Hidden in a factory is a mystery that harkens back to World War Two.  A machine that is responsible for releasing aliens into the England that was thought to have been destroyed during a German bombing raid.  The Doctor has discovered that it is now functioning and needs to find a way to stop it before an alien invasion destroys the Earth.

I really enjoyed The Crawling Terror.  Mike Tucker uses the blend of horror and science fiction perfectly to give us one of the better books to come from any Doctor Who book range in quite some time.  He gives us a story that is pretty scary and full of great moments of The Doctor and Clara escaping harrowing scenarios with the giant bugs especially the spider.  I also liked the science fiction part also.  Having a machine like the bell that used a stone circle was pretty classic and something you have seen before on TV.  But the real reason of the Bell was to use as a weapon against the Germans but in true Doctor Who form it ended up opening up dimensional doorway for the aliens to invade us.  Even though that wasn’t a clever idea but one that works really well for Doctor Who and even better with an author who knows how to make it work.

I’ve always liked Mike Tucker as an author.  Ever since I read his BBC Past Doctor’s books featuring The 7th Doctor and Ace I’ve been a fan of his and also enjoyed his Big Finish works also.  Most fans will know Mike Tucker for his work on Doctor Who classic and New mainly for his model work.  A good example is during The Day of The Doctor with the TARDIS bursting through the wall and crashing into the Daleks.  His other work can be seen from the McCoy era on to the Capladi Era of Doctor Who.  If you see a model shot in the new series it is probably been done by Mike Tucker’s crew.

The Crawling Terror was a really good book that fans of the Classic Series and New Series will enjoy.  It has a classic story feel to it and incorporates NuWho characters.  Mike Tucker captures the feel and style of the 12th Doctor perfectly considering he had to write this book before Capaldi debuted on TV.   I really enjoyed this book and really enjoyed the horror aspect of it.  Doctor Who should really get back to its horror roots and have more stories that are scary and give you that fright. I thoroughly enjoyed the frights in The Crawling Terror.

The Crawling Terror is definetly one of the best Doctor Who books I have read featuring a NuWho Doctor and I hope someday Steven Moffat or the next show runner gives Mike Tucker a chance of writing an adventure for the Television Show.
Grade A