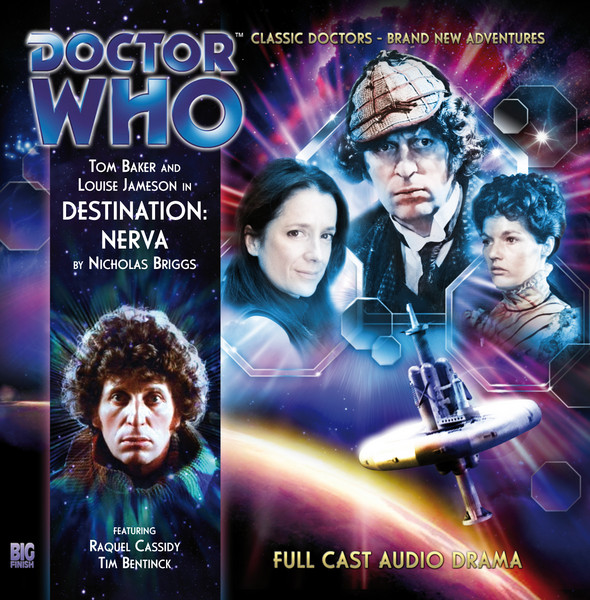 After saying their goodbyes to Professor Litefoot and Henry Gordon Jago, the Doctor and Leela respond to an alien distress call beamed direct from Victorian England. It's the beginning of a journey that will take them to the newly built Space Dock Nerva... where a long overdue homecoming is expected. A homecoming that could bring about the end of humanity.

Destination Nerva does two things: reintroduce the Fourth Doctor and tells an interesting and dramatic story. The writer of the tale, Nicholas Briggs takes us on a journey that encompasses both the earlier part of the Fourth Doctor’s era and the later part of it. The opening which sees a group of 19th century Londoners seemingly under attack from an alien threat is both blood curdling and intense. Briggs makes the opening to the drama sound like a 70s Hammer Horror film with its delicious dialogue and macabre sound effects. Briggs then contrasts this by following with the Doctor and Leela in the TARDIS talking about space and time. The two scenes nicely contrast one another; science fiction meets the creepy Hammer Horror style. This also sets up the tone of the overall story as The

Doctor and Leela attempt to survive in an environment that feels like a mixture of science fiction and horror. Both elements nicely sum up Baker’s era on the show; one part being the mid-70s Hinchliffe era in which The Doctor faced off threats like Mangus Greel in Victorian London and the Fendalh in a country home, while the other represents the more space orientated approach the show returned to following Hinchliffe’s departure.

Tom Baker’s performance as the Fourth Doctor feels like a return to old form. Baker is a bit rusty at times but throughout he never loses the Fourth Doctor’s sparkle or sense of gravitas. Both elements are present in the story; the sparkle being apparent during his interactions with Leela but also when he and Leela first arrive at Nerva and the gravitas being apparent during his encounter with Lord Jack. While later audio stories show Baker much more in touch with his most famous role, his return is still excellent and makes you think that he hadn’t ever left the part.

Overall Destination Nerva is fun, macabre and a dramatic return to form for the Fourth Doctor. While perhaps not the greatest story that you’ll hear from Big Finish, it is enjoyable enough at least to warrant a listen, if not just to hear Tom Baker’s booming tones.
Posted by DR5WHO at 5:00 AM