Doctor Who - Details on the Second Doctor Box Set 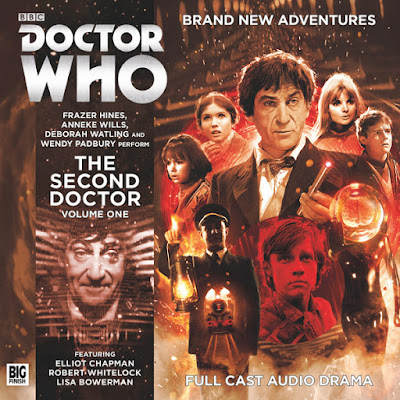 Out this month is the Second Doctor Volume One.  It is a box set of four stories taking place during the Patrick Troughton era.  This is similar to the First Doctor box set that cam out last year.  You can order it from the Big Finish website.
https://www.bigfinish.com/releases/v/the-second-doctor-volume-01-1329

A new four-disc release featuring four tales from figures associated with the Second Doctor era, and a second actor.

10.1 The Mouthless Dead by John Pritchard
The TARDIS arrives in 1920s England, the Doctor, Jamie, Ben and Polly finding themselves in a wintry dusk beside a railway line. The station nearby appears deserted, but there are figures watching from the shadows, all of them waiting for a dead man’s train...

10.2 The Story of Extinction by Ian Atkins
Civilisations rise and fall – and few planets have seen this happen more often than Amyrndaa. The Doctor, Jamie and Victoria join a survey team to find out why on the planet where everything is suited to creating life, nothing lives for long...

10.3 The Integral by David Bartlett
When tempers fray in the TARDIS, the Doctor struggles to help Jamie and Zoe resolve their differences. Arriving at Aspen Base proves a welcome distraction; but the isolated facility is under siege. Can Jamie’s belief in right and wrong withstand the perspective changing power of the Integral?

10.4 The Edge by Rob Nisbet
The Edge is the galaxy’s scientific hub of experimentation, theoretical breakthroughs and invention – just the sort of place to interest the Doctor and Zoe. However, a secret lies hidden in The Edge laboratories. Jamie instinctively knows that something is wrong, and it doesn’t take long for him to be proved right....