Titan Comics has released its NYCC convention schedule for panels, autograph signings and what they will have for convention exclusives.  Titan Comics has a lot of great stuff in store for NYCC and if you are going make sure to stop by their booth #2142 and get some cool Doctor Who merchandise. 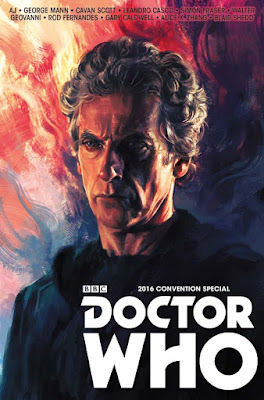 TITAN’S DOCTOR WHO COMICS LAND IN

THE BIG APPLE FOR NYCC!

(September 29, 2016) - Titan Comics is excited to announce that Doctor Who comics – under license from BBC Worldwide North America – will be arriving in force at New York Comic-Con (October 6-9), bringing special appearances, illuminating creators, and more!

On Friday, October 7, 2016, at the NYCC Live Stage at 11:15AM, Titan kicks off the celebrations with an exciting Doctor Who livestream interview featuring creators from across all Titan’s Doctor Who comics line, including writers Nick Abadzis and Paul Cornell, artists Simon Fraser and Rachael Stott, and editor Andrew James.

That’s not all! Titan’s Doctor Who panel is one fans will not want to miss - packed with exclusive reveals, never-before-seen artwork previews, and comic guests! With writers Nick Abadzis, Paul Cornell, Simon Fraser, Rachael Stott, artist Chris Jones, and hosted by editor Andrew James, this panel will reveal upcoming plans for Titan’s Doctor Who comics, giving fans the first scoop on 2017 happenings. This highly anticipated panel will take place on Saturday, October 6, at 7:45PM in room 1A21. All attendees will receive a free goodie bag bundle of Ninth, Tenth, Eleventh, and Twelfth Doctor comics – each bag includes the 2015 convention one-shot!

Additionally, Titan is bringing back the Doctor Who 2016 Convention Special comic, featuring an all-new Doctor Who story, The Long Con, starring the Tenth, Eleventh, and Twelfth Doctors! With art by Leandro Casco, Simon Fraser, and Walter Geovanni, this convention special comic comes with two collectable

covers by Simon Fraser and Alice X. Zhang. The special also includes all nine Supremacy of the Cybermen back-up strips (from the First Doctor to the War Doctor) by George Mann, Cavan Scott, and a cavalcade of amazing creators, including Dan Boultwood, Mike Collins, Simon Myers, Andrew Pepoy, Blair Shedd, Lee Sullivan, and many more.

Doctor Who fans attending this year’s New York Comic-Con can purchase this special comic at the Titan booth #2142, home to a fantastic range of Doctor Who comics and collections. 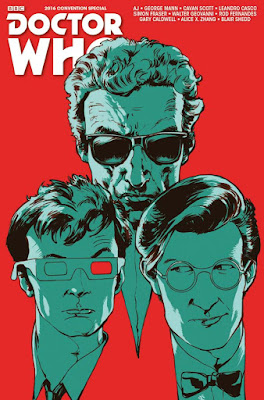