Details for Doctor Who - The Diary of River Song Series 3 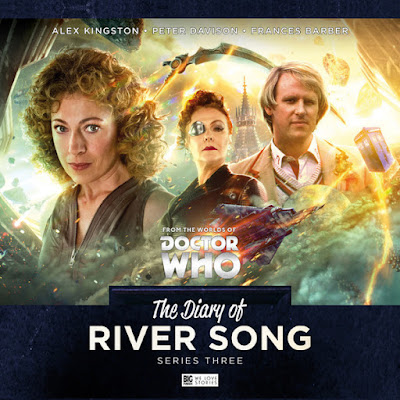 Out this month is the third box set featuring Alex Kingston as River Song and this time she meets up with only one Classic Doctor the Fifth Doctor Peter Davison.  You can order this box set from the Big Finish website.
https://www.bigfinish.com/releases/v/the-diary-of-river-song-series-03-1724

On Terminus Prime, clients choose their own means of demise. Something exciting, meaningful, or heroic to end it all.

But when River discovers that there are repeat customers, she knows something more is going on.

She begins to uncover a cult with worrying abilities. Its members can apparently cheat death, and that’s not all they have in common with River…

3.2 – A Requiem for the Doctor by Jac Rayner

River has joined the Doctor and his friend Brooke on their travels, and they stop off in 18th century Vienna.

Mozart’s legacy is not just his music. River has more than one mystery to solve before a killer is let loose on the people of Vienna – and on the Doctor.

3.3 – My Dinner with Andrew by John Dorney

The most exclusive, most discreet dining experience outside the universe. For the restaurant exists beyond spacetime itself, and the usual rules of causality do not apply. Anything could happen.

It is here that the Doctor has a date. With River Song. And with death.

Stories of the Furies abound across the cosmos: vengeful spirits hounding guilty souls to death. Madame Kovarian taught them to a child raised in fear, trained to kill, and placed inside a spacesuit.

Kovarian knows the universe’s greatest threat, the Doctor must be eliminated. An assassin was created for that purpose.

But if Melody Pond has failed, Kovarian will simply have to try again…