Details for Doctor Who - Kingdom of Lies 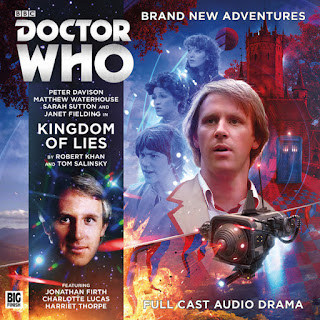 Out this month from Big Finish for the main range series is the beginning of a 5th Doctor, Tegan, Nyssa and Adric series of stories.  This month sees the traveling companions on the planet Cardenas where their appears to be a civil war going on.  You can order this release from the Big Finish website.
https://www.bigfinish.com/releases/v/kingdom-of-lies-1264

On the planet Cicero Prime, the kingdom of Cardenas is divided, with the whole population forced to swear allegiance to either the effete Duke or the fiery, hard-edged Duchess. This is a situation both parties have grown tired of. What use is half a kingdom when, thanks to a carefully engineered murder, you could have it all?

Surely, neither of them would be rash enough to summon the deadly off-world assassin The Scorpion to help with their problem? And surely, this terrifying figure wouldn’t arrive wearing a long cream coat and striped trousers…?