Details for Doctor Who Magazine 521 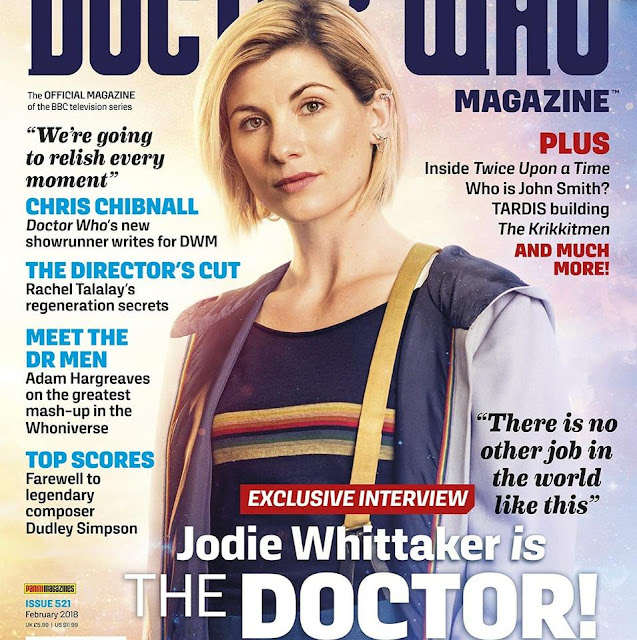 Out today is the newest issue of Doctor Who Magazine and the first one to feature Jodie Whittaker as the new Doctor.  Issue 521 also features Chris Chibnall taking over the Production Notes column from Steven Moffatt.  Plus the continuing comic strip featuring the 12th Doctor and Bill.  You can get this issue today in the UK.

“There is no other job in the world like this,” Jodie Whittaker tells the new issue of DWM. Jodie also
discusses her regeneration scene and working with costume designer Ray Holman: “The very first meeting we had was all very secret and incognito. As we were talking I was completely distracted by the colour of the wallpaper behind us. I told Roy I absolutely loved that colour, and that’s the colour of the trousers.”

RACHEL TALALAY
The director of Twice Upon a Time on the filming of Peter Capaldi and Jodie Whittaker’s regeneration scene.

TWICE UPON A TIME
Exclusive set report and unseen images from the 2017 Christmas Special.

WHO IS JOHN SMITH?
The fan turned visual effects pro who worked on the Twelfth Doctor’s final adventures.

DUDLEY SIMPSON
Tributes to the composer who wrote some of Doctor Who’s best-loved scores.

TARDIS BUILDING
A first-hand account of how the 1960s TARDIS prop was recreated for Twice Upon a Time.

MEET THE DR MEN
Writer and illustrator Adam Hargreaves explains how his Mr Men entered the world of Doctor Who.

THE FACE OF EVIL
The Fact of Fiction explores the 1977 story that introduced the Fourth Doctor’s companion Leela.

THE PHANTOM PIPER
Part Three of The Phantom Piper, a new comic strip adventure featuring the Twelfth Doctor and Bill.

PLUS…
The Blogs of Doom, previews, reviews, news, the DWM Christmas Quiz answers and prize-winning competitions!

Email ThisBlogThis!Share to TwitterShare to FacebookShare to Pinterest
Labels: doctor who, Doctor Who Magazine 521, Jodie Whittaker