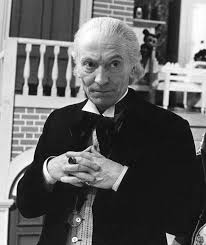 Since 2018 brings us a new Doctor in Jodi Whittaker I thought it would be good to do a countdown of the top stories from each Doctors era.  First up is the best stories from the William Hartnell era.

10.  An Unearthly Child
Written By Anthony Coburn
Directed By Waris Hussein
Why It’s In The Top 10:
It was the one that started it all.  An Unearthly Child introduced us to The Doctor and the TARDIS.  The first part is totally a classic as it sets up the mystery of the series and the main character.  You get a sense of dubiousness about the Doctor but we end up thinking he is alright by the end of the story.  Unfortunately the next three parts are pretty dull and it is a wonder that the show makes it at all.  But we have a certain villain in the next story to thank for the success of Doctor Who. An Unearthly Child’s place in history for being the starting point for Doctor Who more than makes up for its short comings and the legion of fans should be thankful for it.


9.  The Aztecs
Written By John Lucarotti
Directed By John Crockett
Why It’s In The Top 10:
It is hailed by many to be the best historical story in Doctor Who.  You have the human conflict that Barbara goes through to try and change the Aztec people and make them a better people and go against their customs of sacrificing people.  One of the best historical stories and it is a story that should be used as a blue print if they ever decide to do a pure historical story again.  The Aztecs is  the first time The Doctor explains that you cannot change history not one line ever.

8.  The Romans
Written By Dennis Spooner
Directed By Christopher Barry
Why It’s In The Top 10:
It is one of the funniest stories in Doctor Who.  It has a charm about it and is not boring as most historical stories where.  It is a fun story to watch and there is enough action and intrigued to keep the casual fan happy.  The Romans is the type of story that does't get hurt from the era it was made in.  It still stands up today and it is good to see a story that doesn't have the monster of the week in it.  Plus it is also William Hartnell at his best as he gets to do a bit of comedy again. 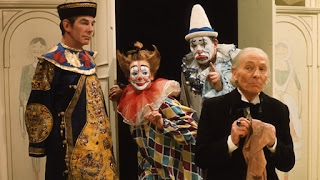 7. The Celestial Toymaker
Written By Brian Hayles
Directed By Bill Sellars
Why It’s In The Top Ten:
The Doctor meets his match.  It is a really clever story with lots of interesting characters. It is one of the few stories in Doctor Who that the Doctor has to use his brains and outsmart his opponent.  It takes place in another dimension where games are played and are deadly to the player. For if you lose the games you are trapped in the Celestial Toymakers dimension forever and you become one of his playthings.  It is a really clever story as for most of it the Doctor is invisible and you only see his hands playing the trilogic game.  It is a really clever story as The Doctor faces a foe he has meet before and one that uses games as its weapon.  The Celestial Toymaker was one of the cleverer written stories from the 1st Doctors era.


6. The Edge of Destruction
Written By David Whitaker
Directed By Richard Martin & Frank Cox
Why It’s In The Top 10:
It is the only story to take place entirely inside the TARDIS.  It is a great story that pulls on the paranoia of the travelers. We have a pretty controversial scene for the 1960's as we see Susan attack her bed with scissors.  It is a powerful scene as you get a sense that something is truly not right.  Plus Barbara really lays into The Doctor and shows a backbone as she refuses to be bullied by him.  It is also a great science fiction story with a pretty cool premise. 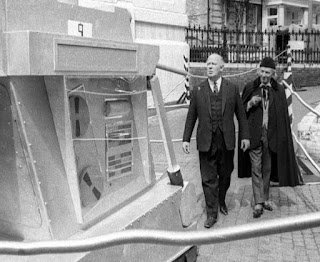 5.  The War Machines
Written By Ian Stuart Black
Directed By Michael Ferguson
Why It’s In The Top 10:
It’s the first story to take place in contemporary London.  In fact this story takes place during modern day and shows off the time very well.  It was neat to see The Doctor working with the army and you could almost see The War Machines as a UNIT story.  It has The Doctor going up against a computer that wants to take over the world with the aid of brainwashing and the use of The War Machines.  Plus it has the strangest of companions leaving ever as Dodo is just whisked away and she tells The Doctor by a letter.  Plus Ben and Polly join him in the TARDIS as the new companions.  A really good story that takes place in contemporary London and will be the blue print for future present day Earth stories in the Classic Series.

4.  The Daleks
Written By Terry Nation
Directed By Richard Martin & Christopher Barry
Why It’s In The Top 10:
It is the first appearance of The Doctor’s greatest enemies The Daleks.  This story  more or less got the phenomenon of Doctor Who started as the popularity of The Daleks and Dalekmania took off and was an immediate success and money maker for the BBC.  It is one of the times where the villain in science fiction is not a bug eyed alien in a rubber suit but there will be plenty of those in Doctor Who's future.  Plus it is the first time in the show that The Doctor goes to the future and to an alien planet where we meet the Thals for the first time also. They are significant as they will be used again as one of the protagonist to the Daleks and they do have a significant part in the story.   The Daleks just sets up a whole series of wonderful stories and meetings between The Doctor and The Daleks. 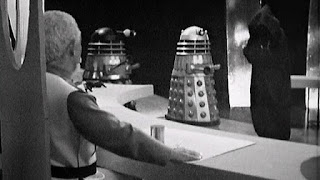 3.The Dalek Masterplan
Written By Terry Nation & Dennis Spooner
Directed By Douglas Camfield
Why It’s In The Top 10:
It is the most epic and longest story in Doctor Who’s history.  It stands at 12 episodes long and it pits The Doctor against The Daleks and the madman Mavic Chen.  It also has a historical aspect to it that isn’t one of happiness as two companions, Sarah Kingdom is a companion in my opinion, and Katarina are killed off.  This was the first time a traveling companion has left the show by being killed off.   It is so vast and long and such a complex story with lots going on that it would be pretty interesting to watch if it existed in full.  The Dalek Masterplan is also the first appearance of Nicholas Courtney in Doctor Who as he played Bret Vyon.

2.  The Tenth Planet
Written By Kit Pedler & Gerry Davis
Directed By Derek Martinus
Why It’s In The Top 10:
Well it’s pretty obvious why this one is on the list.  Not only does it herald the Cybermen for the first time but it is also the first time that The Doctor regenerates called renewal.  A truly historic story as we say goodbye to William Hartnell and welcome Patrick Troughton.  The Tenth Planet is a really good story and a good way to introduce the Doctors second most popular and deadly enemy the Cybermen.  Just look at the historical aspect of The Tenth Planet as he producers were so bold to replace the actor to keep the show going by doing the regeneration.  Good thing they did or else the show would have ended in 1966. 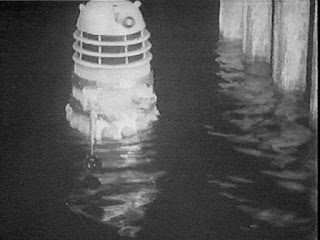 1.  The Dalek Invasion of Earth
Written By Terry Nation
Directed By Richard Martin
Why It’s In The Top 10:
Why it’s the return of The Daleks and this time they are on Earth.  The Dalek Invasion of Earth is a story that is really well written and with so many great moments.  It is scary because the Daleks are on Earth and cruising along landmarks we recognize.  But for me the highlight is of the Dalek rising out of the Thames.  That scene is truly a classic.  I would be remiss if I didn’t mention the historical aspect of this story.  The Dalek Invasion of Earth is the first story where a companion leaves the TARDIS.  Susan leaves her grandfather as The Doctor locks the doors on her and helps in making her decision to stay with David.  This story is quite the gem of the First Doctor’s era and the best in my opinion.