Details on Doctor Who - The Fourth Doctor Adventures Vol 1 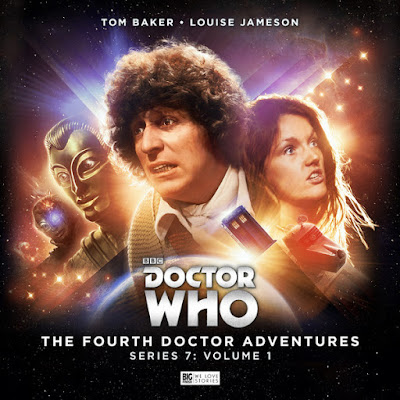 Out now from Big Finish is a box set of 4th Doctor adventures.  In this box set he is joined by Leela who is once again played by Louise Jameson. You can get this set of adventures as a box set or individually from the Big Finish website.
https://www.bigfinish.com/releases/v/series-07-volume-1-1607

The Sons of Kaldor by Andrew Smith

Finding themselves in a seemingly deserted spaceship on an alien world, the Doctor and Leela stumble into some familiar foes - the Voc robots from the planet Kaldor - and… something else. Something outside. Trying to get in.

Reviving the robot’s Kaldoran commander from hibernation, the travellers discover that they’ve found themselves in the middle of a civil war. The ship was hunting the Sons of Kaldor, an armed resistance group working with alien mercenaries to initiate regime change on their homeworld.

But now the Sons of Kaldor may have found them. The Doctor and Leela will have to pick a side. Or die.

The Crowmarsh Experiment by David Llewellyn

When attacked on an alien world, Leela falls unconscious… only to wake in another time, another place.

She is in the Crowmarsh Institute on Earth, in London, in 1978, and everyone is calling her Doctor Marshall. They tell her the world she has known is but a fantasy, a delusion, and that this place is the one that is real.

Surrounded by familiar faces on unfamiliar people, Leela knows what is true and what is false. But how long can she believe when everyone around her says it’s a dream? What’s really happening here?

The Mind Runners by John Dorney

It used to be fun, Mind Running. Hopping into the heads of total strangers to see what they saw, feel what they felt. But one by one the Mind Runners are dying in a wave of suicides. And no-one on the planet Chaldera knows why.

The Doctor, Leela and K9 arrive in the city that covers all of this dying world as it prepares to evacuate its people, and they immediately find themselves involved in a mystery. Who or what is responsible for the wave of death? Is it the motorised cult known as the Digitals? The enigmatic Mr Shift?

Or did all the victims attempt to run the Night Mind, the demonic consciousness of legend that is so twisted and evil that it drives mad all who touch it?

The TARDIS crew are about to find out.

The Demon Rises by John Dorney

A killer has been uncovered, but the mystery is far from solved. The Doctor, Leela, K9 and their friends are on the run, pursued from all sides. All the clues point to one place - but getting there alive may prove impossible.

Something horrific is happening on Chaldera… and it has been happening for longer than anyone could possibly have realised. Now every life on the planet is at stake. Bar one.

The dark secret at the heart of this world is about to be revealed.