All the big network schedules are in and for Sci-fi & Fantasy we have a couple of new series to look forward to as well as one or two interesting moves.

First off, here is the latest fall season grid –


We have nothing on Tuesday but Wednesday sees the CW moving their long running series Supernatural to 9pm.  The lead in for that show will be the new series, Arrow at 8pm.  Neighbors looks to be a dreadful comedy about a family moving into a neighborhood or aliens. 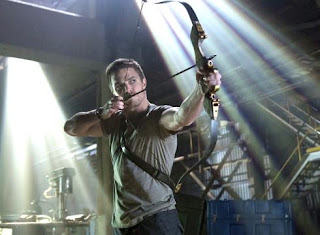 Thursday continues CW’s genre shows with The Vampire Diaries still at 8pm.  Beauty and the Beast will follow at 9pm.

CBS tweaks their line-up on Thursday with Big Bang Theory at 8pm being followed by the ailing Two and a Half Men followed by the second season of Person of Interest at 9pm.  The Sherlock rip off, I mean, similar type show, Elementary will air at 10pm.

ABC dives into the mix with Last Resort at 8pm.


The usually busy Friday nights are no longer as busy with Supernatural moved to Wednesdays.  9pm sees Fringe on Fox and Grimm on NBC continue to battle it out.  Touch moves to 8pm for Fox while CW has Nikita at 9pm.

Once Upon a Time is back on Sundays at 8pm on ABC.

There has been no official word on some of the cable channel series like The Walking Dead and American Horror Story, both of which have been renewed.

There are some other border line Sci-Fi Fantasy shows not mentioned here, probably because there is no word on where and when.
Posted by SHADOKP at 1:21 PM