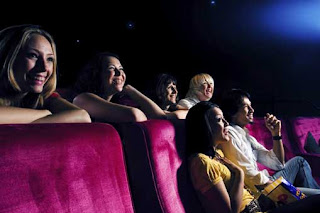 In order to keep the movie theater experience enjoyable and original, theaters will continue to amp up their technology to match the standards of the day.  Whether this means improving the resolution of their projectors or installing a better sound system, the improvements will generally enhance the movie going experience for all.


Another way to create a more memorable experience is the use of gimmicks such as 3-D.  3-D is currently the most popular gimmick which is odd because it is not improving the visuals of the movie.  It is tricking our eyes into seeing a depth of field.  Somehow this has taken off as it did in the 50’s and to a lesser extent in the 80’s.  Theaters will continue to play the 3-D card but I would expect the next stage of this would be a theater that does not require the glasses.  Whether that means a development of an actual 3-D visual technology or just more gimmicks remains to be seen.  It won’t be a major surprise to see a glasses free technology developed over the next 10 years.

The rumble seat and/or D-Box is another gimmick that is, just like 3-D, nothing new. A seat that rumbles depending on the noise level of the movie can enhance the experience as do the motion ride seats of D-Box in other theaters.  These turn the theaters into versions of the motion rides of theme parks.

Other gimmicks still in the works include the smell-o-vision.

Already existing in a limited capacity are theaters with comfortable chairs, food servers at your request and other amenities.  Reserved seating exists with IMAX and other specialty theaters and that idea may continue to expand to other theaters.

IMAX and other theaters like XD provide superior quality along with larger screens.  The increasing size of the screen is in reaction to a trend of TVs getting larger and larger.  Countering a trend in the 80’s as the theaters got rid of the largest screens just to make room for more theaters, the new large screens add an appeal for audiences.

Of course all these perks to improve the theater experience come at a cost and so only people with disposable income and movie fans will be able to take part.  Others will have to pick and choose when they take part in these bonuses.

I hesitate to place the following in the gimmick category because it is a substantial technology that is meant to improve on a standard of today.  The problem is that it may not be accepted by audiences.  The 48 frame per second experiment that filmmaker Peter Jackson is using with The Hobbit is meant to deliver a stark increase in quality of the movie image.  This and special effect expert Douglas Trumball (who is working on a 60 frames a second format called showscan) are meant to recreate images that are closer to real life than anything we have seen before.  These changes are meant to eliminate many of the problems associated with movies today including the motion blur but the result is an appearance like video that is compared to daytime soap operas.  The look of video compared to film gives video the label as looking cheap.  These processes could look fantastic but the art of film is engrained in our minds and may be hard to shake.


The improvement of visuals and better sound will make the theaters more attractive and keep people coming.  No doubt that these technologies will improve as time goes on.

Most movie theaters are reveling in the digital projection and HD.  Not only does this make projecting the movies easier and less expensive but the showing of older movies is also much easier.  Why those cost savings of not having to purchase film canisters have not funneled down to the audiences is questionable.  I guess we would be spending lots more to see a movie.  Currently most theaters receive a hard drive with the movie included but in the near future the internet and satellites will be the main way to transport movies to the cinemas.  All of this behind the scenes technology will be mostly invisible to the consumers.  At some point servers would run the projectors and the whole process will become more automated than it is now.  This should be a cost savings for theaters but that does not mean anything for the audience.

This digital technology is all great and all but already being adversely affected are the small independent theaters still using film.  Film is superior to digital but is more expensive and harder to upkeep.  Those local dives with poor sound and small screens may soon all go away.  Chains like Rave and AMC should prosper.  While I am not a big fan of seeing a second run move in a run down low tech theater, I still like the appeal of the art houses and the independently owned theaters that bring us not only the odd film from time to time but marathons, classic films and so on.  It would be a shame to see those theaters go away.  Because of their nature, they have a better chance than the low end theater that just shows a movie just as it is coming out on disc.

People love nostalgia and that is why we still have a few old drive-in theaters around the country.  Someday movie theaters may be another neat nostalgic oddity that kids ask their parents about.  A day may be coming where all movies are available online for people to see for the first time in their homes.  A day when 50+ inch TVs are common and the high quality images of a movie can be enjoyed at home may not be that far away.  I doubt theaters will vanish as quickly and decisively as the drive-in theaters but many of these factors are moving in that direction.  I would not expect to see this in most of our life times but it will be interesting to see what movie theaters do over the next couple of decades to keep the experience fresh and enjoyable for all.

Email ThisBlogThis!Share to TwitterShare to FacebookShare to Pinterest
Labels: movie technology, The future of movie theaters