Men In Black 3 : Anything Is Possible

Let me start off by saying that most sequels usually decline in quality so my expectations were set for just that. I'm happy to report that this sequel was better than its predecessor. Also, if you are a Doctor Who fan like me, strap yourself into your seat because the deja vu will blow you away. In the original MIB, the story dealt with Agent J (Will Smith) and Agent K's (Tommy Lee Jones) initial meeting and ended with Agent J joining the top secret organization. Men In Black 3 [MIB-3] takes it to a different level and tackles the friendship of the two agents, who have been partners now going on 14 years. And they tackle it in a way that appeals to the time traveler in me and may surprise you in the end.

The movie does start off a little slow for me and I thought it was going to be a little predictable. That was put aside about 20 minutes into the film. Will Smith and Tommy Lee Jones still have their chemistry. A new agent is introduced to us, Agent O, played by the talented Emma Thompson and we meet a young Agent K, played superbly by Josh Brolin. [I wonder if Josh Brolin is actually Tommy Lee Jones incarnate. Joking, of course.] You can't have a MIB-3 movie without a villain and Jemaine Clement delivers a nasty one by the name of Boris the Animal, though he would say to leave off the Animal. Out of everyone, my favourite is an alien named Griffin, an Arcadian [sound familiar?] with a special device [also named similar] and whose species has a wonderful gift, though he feels differently. I'll just say that Griffin would be at home on Gallifrey. Words like timelines, possible futures, endless possibilities and temporal fracture are used. I do believe a MIB-3 writer is a Doctor Who fan. It's evident in one of the goals of the Agents [a wave of deja vu will hit you]. It's even apparent in the shape of the jet-packs. In conclusion, MIB-3 is a fun movie, even in 2-D. The ending will leave you with a different perspective of these two ...  Men in Black.

Now, do you have any chocolate milk? I have a terrible headache. 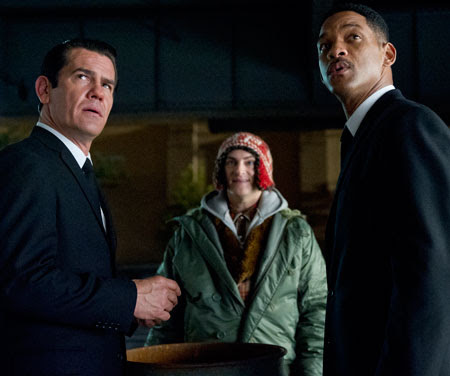