The Future of Movie Theaters - Part One

by Ken Parker
Part One 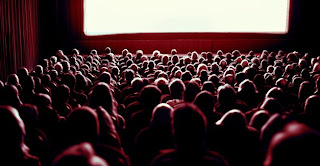 Why Are Movie Theaters Still Popular?

Despite some talk over the past few years that movie theaters would be going the way of its older brother, the Drive In Theater, it seems obvious that Movie Theaters are still very popular.  Recent movies such as Twilight, Hunger Games and The Avengers are all one has to look at to argue that movie theaters are here to stay for the near future.  What is in question is what will theaters be like in the next couple of years and what is going to push them in that direction?

Improved technology has made home theaters more common place.  It is much less expensive to purchase a large screen TV and to watch HD movies.  This ability does give certain people hesitation on going out to the theaters.  People who are just as content watching a movie a few months down the line on their high quality home theater systems will experience the comfort of their own home and avoid all the negatives associated with going to the theaters.  So why do people still go out to see a movie?

The first run of a movie is the primary reason most people brave the cinemas.  Very few people want to wait, especially if it is a movie they want to see.  Certainly the ability to see a movie at home reduces the need to see something you can watch a few months down the line.  In the past, movies could vanish from theaters and not show up on home video or TV for years.

Will movies always be released in the theater first?  Probably, but there are more and more movies being released on demand or even on disc at the same time as their theatrical release.  Of course most of these movies are the lower budget perhaps lesser quality films.  Films without a wide release are more likely to benefit from these multi platform releases.  It is possible that in the future, more films will go this route but until there is a massive decrease in the amount of money made in the theaters, there is no benefit for most movies.

Bootlegging is still commonplace and can eat into movie theater businesses but for blockbusters, this can’t be a major impact.  The Avengers made 207.4 million domestic it’s first weekend.  It was estimated that some 100,000 downloads of The Avengers movie happened in the (This number was probably much higher).  I would think that most of those people who watched the camera copy of The Avengers just wanted to see it early and went see it in the theater anyhow.  The total number of people who were fine with just a poor camera copy and would not go see the film was probably very small.  A better quality bootleg for a movie not destined to make lots of money may be impacted on a greater level.  If bootlegging becomes easier and less risky than this could be a problem in the future.

Seeing the movie first hand remains one of main reasons movie theaters are still popular.  Despite all the negatives in going out to see a movie and the changes with home viewing (both covered over the next couple of articles), there is nothing quite like seeing a movie in a darkened theater full of strangers!!

One of the reasons why there is a perception that theaters are in trouble is because of the technologies of home theaters.  It is now easy and relatively inexpensive to emulate a movie theater in your own home.  So instead of braving the crowds and expensive movie theaters, you could wait a few months and see a movie in the comfort of your own home.

Despite this, picture and sound quality are generally superior in the movie theaters than home viewing.  Certain movies benefit from being seen on the big screen.  Having a massive screen with incredible sound can make a film so much better.  Unless you spend thousands on a home theater, what we have at home pales in comparison.

I say that movie theaters have better sound and visuals but this is not always the case.  Some smaller and/or older theaters may have really bad equipment at work so don’t assume this.

Getting out of the house and going to a movie is a big reason people still do it.  It is an experience and usually a good time out with friends.  Movie theaters are a great platform for dating as well as movie going works well as a ice breaker for new relationships. Watching a movie with a crowd of people can be an excellent experience, especially if they are into the movie and cheer, clap, gasp and laugh at the right moments.  It enhances the experience.  Have some friends to share the experience can also be rewarding.  Going out gives you something to look forward to whether you do it weekly, monthly or annually.

The next part we will look at the negatives at going to the movie...

Email ThisBlogThis!Share to TwitterShare to FacebookShare to Pinterest
Labels: movie technology, technology for fans, The future of movie theaters