Michael Socha on Being Human Series 5 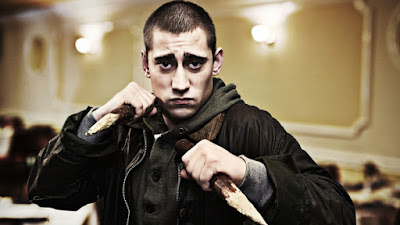 Here is another interview with a cast member from Being Human. This time it's Michael Socha who plays Tom.
Source: BBC Media Center

Tom is still at Honolulu Heights with Alex, and Hal is still strapped to the chair he was in at the end of last series. With Hal still restrained because of his bloodlust, things are definitely not easy for the guys. Tom and Alex don’t want Hal to go back to his old vampire lifestyle, so we’re hoping that forcing him to go cold-turkey will help, but Hal’s still messed up from it all. When you see him, he’s sweaty and being spoon-fed mashed banana – it’s not pretty.

Eventually, Tom has to decide if he can trust Hal enough to let him go which is really hard for him because he doesn’t want to think badly of his best mate. Plus, Tom is trying to help Alex who is having a hard time coming to terms with being a ghost, like the fact that no one can see her and her family don’t really know what happened to her. It’s not easy for Alex because it’s all still new and she still partly blames Hal for her death.

Has Tom had to change much?

I think a lot of things have changed for Tom. He has grown up a bit and he has had to mature, but his main issue is understanding normality. In Series Three, ‘normal’ was being in the woods with his dad and killing vampires; he understood that. But then he started needing different things and wanted to meet people, maybe meet a girl and he wanted a friend other than just his dad. Then in Series Four, he does make friends and ends up having a best friend in Hal. Plus he gets to live in a proper home and gradually things change for Tom… he becomes part of ‘society’.

It must have been quite a jump going from vampire killer to café worker?

Ha, yeah it was, although now, he’s unemployed and no longer working at the café because he was too busy looking after Hal. So he’s living… actually he’s ‘slobbing’ right at the beginning of series five, he’s taking advantage of the sofa and the television! But not for long because, Tom and Hal end up getting new jobs a local hotel and that’s when all the ‘fun’ starts.

What kind of fun?

When Tom and Hal get new jobs at a local hotel, it’s a totally new experience for him: he has to dress up and look after people, plus he has to look like he knows what he’s doing! For Hal this all comes easily, because he’s used that kind of etiquette and the ‘gentleman’s’ way of life and this sparks a small rivalry between the two guys. But there’s a spanner in the works, because the new bad guy, Captain Hatch, is introduced into their place of employment and he likes to cause trouble, especially between Hal and Tom. You could say he gets a real kick out of it.

Will you be fighting any more Old Ones?

No, we’ve defeated the Old Ones, so there’s an element of ease at the beginning of the new series.

Tom is very chivalrous, kind and calm but then he is also this powerful supernatural monster. What’s it like having that split personality in your character?

It’s great and not something I had ever done before. I get to play this innocent, green werewolf! It’s a bit mad really but I really enjoy it.

How is Tom adjusting to all the changes?

Tom’s definitely better adjusted to being ‘human’, especially since he has experienced life a bit more. But he’s still confused about a lot of things; things we probably take for granted. He’s still learning and gets confused about aspects of life because Tom has lived in quite a black and white world, but now he understands that there are depths to people and there isn’t just love and anger, there are loads of aspects to the world he isn’t sure of. It’s hard for Tom but he’s grown up an awful lot.

You feel that your character is special. It’s not your normal nine-to-five. You’re not someone who goes home and lives a normal life. As Tom, I’ve got to deal with this massive curse, but what’s great is that there are other characters who are in the same boat as you! As the series goes, this has always been the case in Being Human, all of these new supernatural beings end up finding us. At one point in Series Five, Tom ends up looking after one of the new characters. For the first time, he becomes important to someone else outside of the trio, because he is the one in charge and giving the orders. It was great!

I find the fans really interesting and nice, and I’ll go over and say hello. I can’t believe that they’ve come so far to support the show. They’re just lovely people. When I used to live in Cardiff, I used to stop and have a chat. It’s great to have that feedback from them because the fact they care enough to tell me is amazing.