Doctor Who - Details For The Isos Network 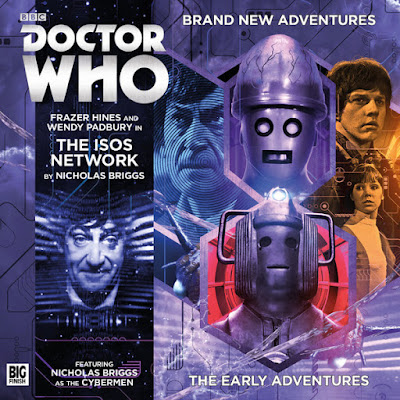 This month Early Adventure release, and the last one till September, sees the Second Doctor taking on the Cybermen.  This adventure stars Frazer Hines as Jamie and Wendy Padbury as Zoe.  You can order it now from the Big Finish website.
http://www.bigfinish.com/releases/v/the-isos-network-1079

The Doctor, Jamie and Zoe are leaving Earth after having successfully defeated a Cyberman invasion… The Cyber-fleet is still exploding… But something is escaping through the mass of vaporising debris.

In hot pursuit, the Doctor and his friends find themselves drawn to a mysterious planet where strange beasts slither through the streets of a deserted city… And an old enemy lurks beneath the streets.

As a force of heavily-armed aliens arrives, a battle to save the entire galaxy from invasion begins.