Doctor Who Magazine 495 Cover and Details 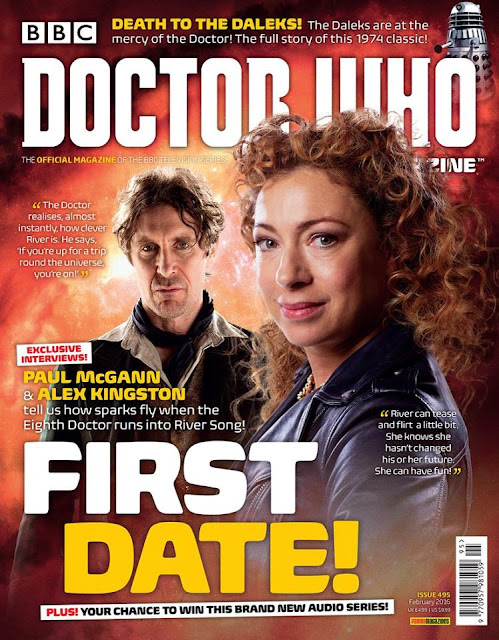 Out today is the latest Doctor Who Magazine and the cover has Alex Kingston on it where she is interviewed about her Big Finish audio adventure release for River Song.  Below is all the details of this months magazine.

River has to interact with the Eighth Doctor to save him, to help him. When she’s figured out how she can do that without having to be physically present in front of him, alongside helping him, she can then tease and flirt a little bit, because she knows she’s safe, and she knows she hasn’t overstepped a boundary, or changed his or her future in any way by that actual physical interaction. So she can then have fun! She’s in control.

And what does the Eighth Doctor make of River?

What the Doctor says to River when he realises her acumen, her calibre, is ‘Wow, hang on a minute – where did you pick up all this?! For an amateur, you ain’t half clever'. He says, ‘Any time you fancy joining me, I could always do with a pair of hands’. He realises, almost instantly, how clever she is. ‘If you’re ever stuck for a trip round the universe helping me out, you’re on.’ So there’s that lovely playfulness as well. Of course, he’s doing it in blissful ignorance. And she’s trying not to appear too clever, and give the game away, but of course she has to save his life. So it’s great. It’s childish, but it’s great fun.

ASK STEVEN MOFFAT
Doctor Who showrunner Steven Moffat answers readers questions about the recent episode Heaven Sent – and find out whether the Doctor ever had to run around the castle naked.

THE DRAGON LORD
The latest comic strip adventure continues with Part 2 of The Dragon Lord, written by Steve Lyons, with art from Adrian Salmon.

CEREAL KILLERS
Doctor Who fans of the 1970s will get nostalgic, as we take a trip down memory lane and meet the artist behind Weetabix’s series of artwork cards, which were launched in 1975, and given away with packets of breakfast cereal.

THE ELEVENTH HOUR APPROACHES
The Time Team returns to watch the first adventure of the Eleventh Doctor – The Eleventh Hour. What will they make of the new Doctor, Amy Pond and Prisoner Zero?

WREAKING HAVOC
A tribute to stuntman Derek Ware, who worked on Doctor Who during its first decade, and has recently passed away at the age of 77.

THE EXXILON FACTOR
The Fact of Fiction takes an in-depth look at the 1974 Third Doctor adventure Death to the Daleks.

THE DWM REVIEW
DWM reviews the recent Christmas Special, The Husbands of River Song. We also take a look at the latest books and audio and revisit 1968’s The Wheel in Space and 1977’s The Face of Evil.

THE DWM SEASON SURVEY!
Vote for your favourites of the most recent series, plus the book and audio releases from the past 12 months!

PLUS! All the latest official news, previews of upcoming releases, competitions, the answers to The Watcher’s Fiendishly Festive Christmas Quiz, The DWM Crossword and much more!

Email ThisBlogThis!Share to TwitterShare to FacebookShare to Pinterest
Labels: Alex Kingston, doctor who, Doctor Who Magazine 495