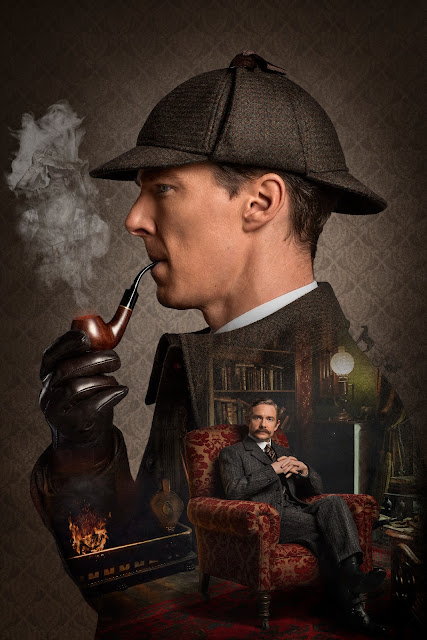 We take a detour from our Who news to look at the Sherlock New Year's special by Doctor Who Show Runner and writers Steven Moffat and Mark Gatiss.

Sherlock:
The Abominable Bride
By Steven Moffat and Mark
Gatiss

“Rest assured there are no ghosts in this world. Save those we make for ourselves”

After a long wait and a lot of speculation on what the New Year’s Day special would be about for the critically acclaimed Sherlock series by Steven Moffat and Mark Gatiss has finally been shown on our TV Screens.   We now know the answers to all our speculations and was it worth the long wait since 2014 when the show was last on?  Most fans would say yes and for me the lure was seeing the main cast set in Victorian times and yes this special was pretty good if not a tad confusing at times. 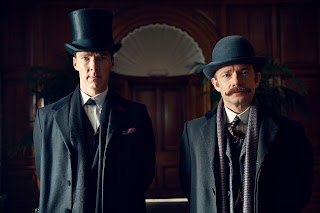 What I mean by confusing at times if you are not a diehard fan who have watched all three series and have been devoted to the show since it’s been on, well, you may be a bit lost watching this special especially towards the end.  While watching The Abominable Bride my thought towards the end and when modern day started to seep into the narrative that the casual fan or casual viewer tuning in to watch a Sherlock Holmes adventure might be lost and yes they most likely were as The Abominable Bride pretty cleverly fit into the regular continuity of the ongoing series and ties in with the Series three’s finale cliffhanger.   That was pretty clever how they worked all that in but for me I would have preferred if the story was a standalone story and stayed firmly in the Victorian times. 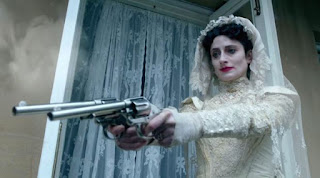 Don’t get me wrong I really enjoyed The Abominable Bride as it was with the main part of the story being in Sherlock’s mind palace but I would have really liked if this story was just a standalone story set in the 1880’s.  It would have been pretty cool if Moffat and Gatiss went in that direction as they could have paid homage to past Holmes series like the Jeremy Brett era Holmes show which did get some nods in The Abominable Bride.  It would have been a pretty cool story just being set in Victorian Times and they could have done it again and again as a series of specials throughout the time they are doing Sherlock as a way to keep the fans happy.  I for one would love that and it would be a different type of pace from what they have given us before.  Oh well an opportunity lost but I still enjoyed what we got on January First.

With that said I did enjoy The Abominable Bride and how Moffat and Gatiss were able to spin modern day Sherlock into this story.  Apparently this entire story took place in Sherlock’s drug induced mind.  We get an idea of what Sherlock does in his mind palace and what he really thinks about his brother.  In the books Mycroft is chubbier than he is portrayed by Mark Gatiss but wow they really went overboard on that makeup.  In fact I still don’t know why that was in story with them having a bet on when he would eat himself to death but considering that it was a drug induced dream it makes sense on the second viewing.  I did like the way they kept going back and forth from the present and then back to Sherlock’s dream even though at points it got hard to decipher when he was back in the present. 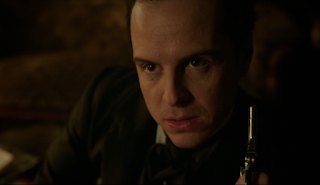 What was really the basis of the story was the Moriarty factor.  Yes he appeared in the dream but in fact Moriarty was the ghost for Sherlock to conquer.  Take the quote at the top of this review.  That is in reference to Sherlock struggling with the fact of Moriarty is his chief rival who is dead.  Sherlock is struggling with the fact that he might be alive and the whole case of Emilia Ricoletti faking her death to kill her husband was really Sherlock trying to work out how Moriarty was alive.  In fact he does come up with the solution when he confronts all the women who helped Emilia Ricoletti with her plan and kept it going after she eventually killed herself.  That same deduction is what he needed and alluded to at the end when he told Watson that Moriarty was dead.  In fact I wouldn’t be surprised if someone else is taking up the Moriarty mantle whenever the series returns. 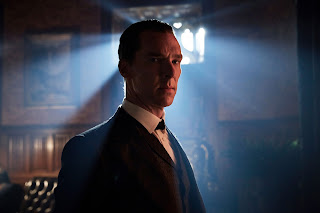 The Abominable Bride was a pretty good special and it will definitely get the fans speculating about what will happen next in Series.  I really loved the whole Victorian setting and I was really engrossed in the overall story and wasn’t put off with the “I’m more clever than you” moments that Gatiss and Moffat throw into the story and those moments really did work and made the story more a lot interesting.  It was also pretty good having the women rights movement incorporated into this story as it is an important part of our history and you can see how things have changed especially with the way Watson was towards the females in the story and you made you think how far we have come.

The Abominable Bride was a fun story to watch filled with a lot of things to make you think about Sherlock Series 4 but I just wished it was a standalone story in Victorian Times but who knows maybe next time.  Hopefully we won’t have to wait as long as we had too for this New Year’s Day Special.
Grade A