Doctor Who - Details For The Waters of Amsterdam 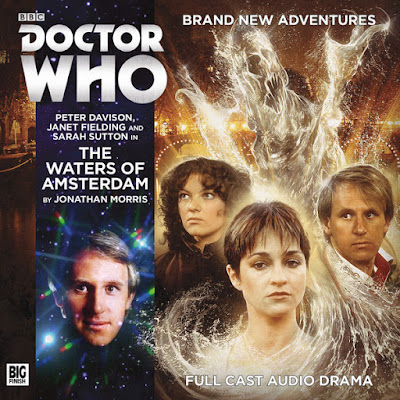 This month's Main Range sees The Fifth Doctor, Nyssa and Tegan going to a museum after the events of Omega.  But in true Doctor fashion the mini vacation is short lived as there appears to be some ghosts in the canals.  You can order this release from the Big Finish website.
http://www.bigfinish.com/releases/v/the-waters-of-amsterdam-1047

Reunited with the Doctor and Nyssa, Tegan joins them on a trip to Amsterdam's Rijkmuseum to see a new exhibition of the work of Rembrandt van Rijn, featuring his drawings of “Vessels of the Stars”. The Doctor is astonished to discover that they are designs for spaceships that would actually work, and decides to pop back to the Dutch Golden Age for a quiet word with Rembrandt – but the world-weary artist is no mood to help.

Meanwhile, strange forces are swirling in the canals, creatures from ancient myth, the watery, goblin-like Nix. What is their connection to the mysterious Countess Mach-Teldak – and to the events of Tegan’s life during her year away from the Doctor?