Doctor Who - Details For Wave of Destruction 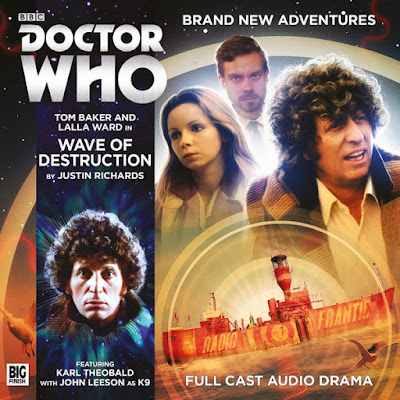 This month sees the return of the Tom Baker 4th Doctor audio adventures and this time he is joined by Lalla Ward who played Romana  during the 4th Doctor era.  You can order this audio release from the Big Finish website.
http://www.bigfinish.com/releases/v/wave-of-destruction-993

A modulated frequency wave cancellation signal isn’t something that the Doctor and Romana expect to detect in 1960s London. But then they don’t expect to find Professor Lanchester, the man who invented it, lying unconscious. Or MI5 investigating.

With the help of MI5 Agent Miller, Lanchester’s daughter Jill, and his nephew a pirate radio DJ called Mark, the Doctor, Romana and K-9 investigate. They soon discover that there is more at risk than they imagined, and an alien invasion is about to begin.

Can the Doctor identify and defeat the aliens in time? Will Romana manage to find a recombinant transducer before it’s too late? And how will K-9 cope with his new job?