Details for Doctor Who - The Blood Furnace 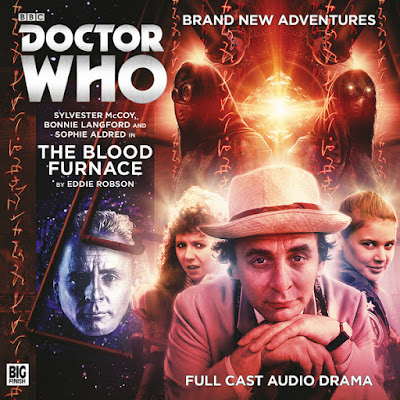 This month's main range features the TARDIS crew of the 7th Doctor Ace and Mel.  This time they are in England of 1991 and on the hunt of an alien assassin.  You can order this release from the Big Finish website.
https://www.bigfinish.com/releases/v/the-blood-furnace-1258

The TARDIS brings the Doctor, Ace and Mel to a recently reopened shipyard in Merseyside. It's 1991, the hardest of times - but now they're shipbuilding once again, thanks to the yard's new owners, the Dark Alloy Corporation. A miracle of job creation - but is it too good to be true?

While the Doctor and Ace go in search of an alien assassin at loose in the yard, Stuart Dale, discoverer of the near-magical Dark Alloy material, has an extraordinary proposition to make to his old college friend, Mel.

But who is the Corporation’s mysterious client? Who does she really represent? And what's the secret of the Blood Furnace? Seeking answers, the Doctor and friends are about to find themselves in very deep water…