Details for Doctor Who - The Third Doctor Adventures Vol 3 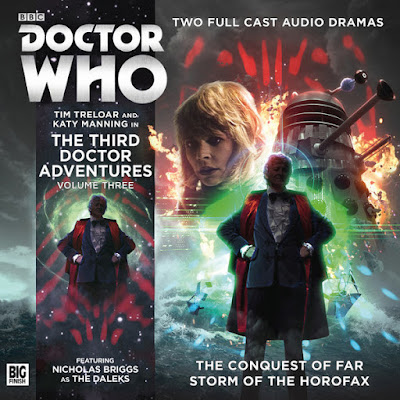 This month sees another Third Doctor Adventures set, the third so far, and yet again it stars Katy Manning as Jo Grant and Tim Treloar as the 3rd Doctor. You can order this audio adventure from the Big Finish website.
https://www.bigfinish.com/releases/v/the-third-doctor-adventures-volume-03-1510

The Conquest of Far, by Nicholas Briggs

Earth Alliance, the future… Fleet commanders receive their orders from the President of Earth. Operation Far is ‘go’. As soon as the planets are suitably aligned, the attack will go ahead.

The Doctor and Jo arrive on the planet Far. The Doctor wants to attend the grand opening of one of the human race’s greatest achievements. A huge Hyper Gateway built to make travel around Earth’s great empire more convenient, bringing relief to many starving outer colonies.

But they land in the wrong time period, long after the Gateway has been in service, and the Daleks have conquered Far! It’s the middle of a war and a deadly game is underway. When everyone has an agenda, betrayal can happen at any time, from any side. The endgame is approaching and maybe this time no one will survive.

Storm of the Horofax, by Andrew Smith

During a North Sea military exercise, the crew of the destroyer HMS Nemesis detect what they suspect is a submarine following them. But it’s actually a futuristic ship with an alien occupant, Arianda.

The Doctor and UNIT are called in, but things are already running out of control. The damaged craft is leaking particles and contaminating the Nemesis with time disruption.

But that’s not the biggest problem. For Arianda is being followed by the warships of the Horofax, who have picked precisely this moment to invade. Soon the destruction of humanity’s future will begin.