Details for Doctor Who - The Skin of the Sleek 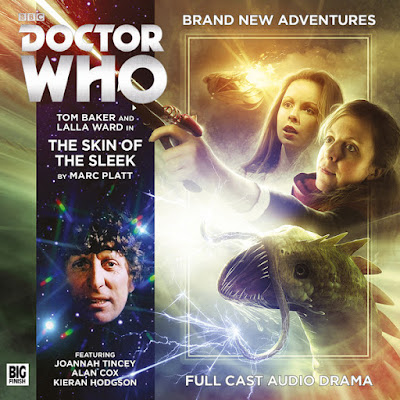 This months 4th Doctor adventure is the first part of a two part story that will continue in Septembers release.  You can order this audio adventure from the Big Finish website.
https://www.bigfinish.com/releases/v/the-skin-of-the-sleek-1240

On the planet Funderell you can walk on the ocean. The surface holds you when you move, but if you stand still, you sink. Lights shift in the fathoms and great shapes move beneath your feet - schools of giant electric eels known as Sleeks.

There is no solid land and the only locals are the Wavewalkers, hunters who live in floating villages. But recently some strangers have arrived, pursuing their own distinct agenda.

When the Doctor and Romana lose the TARDIS to the deep, they need help. Which makes finding a fellow Time Lord on the planet very useful. The fact that Time Lord is Sartia, an old friend of Romana's, is even better!

But this is a planet of secrets. Be careful when you explore its depths. You may just drown.

Note: The adventure continues in Doctor Who - The Fourth Doctor Adventures: The Thief Who Stole Time