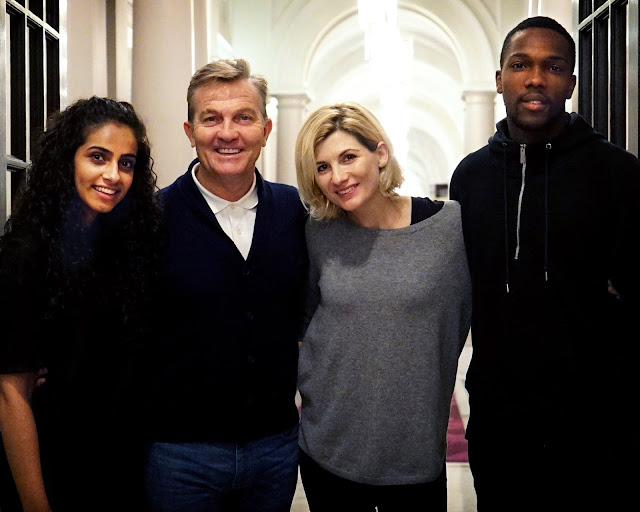 The BBC have announce three companions for Jodi Whittaker's 13th Doctor and they are played by Bradley Walsh, Tosin Cole and Mandip Gill.  Also announced is that the new series will air in the Autumn of 2018 with ten fifty minute episodes with the premiere episode being sixty minutes long.  You can read more about the new series in the press release below.

New York – October 22, 2017 – When Jodie Whittaker takes over as the Thirteenth Doctor on BBC AMERICA’s global hit show Doctor Who next year, she will be joined by an all new regular cast.

Announced today, Bradley Walsh, Tosin Cole and Mandip Gill will line-up as the new regular cast on Doctor Who.

Bradley will star as Graham, Tosin will play Ryan and Mandip will play Yasmin.

Also joining the series in a returning role is Sharon D Clarke.

New head writer and executive producer Chris Chibnall (Broadchurch), who made the decision to cast the first ever woman in the iconic role, is also shaking up who will travel with the Doctor in the TARDIS, with a team of new characters.

In more exclusive news, it is confirmed that the new season will be a ten-week run of fifty-minute episodes in Fall 2018, kicking off with a feature-length hour for the opening launch.

Chris Chibnall says: “The new Doctor is going to need new friends. We’re thrilled to welcome
Mandip, Tosin and Bradley to the Doctor Who family. They’re three of Britain’s brightest talents and we can’t wait to see them dive into brand new adventures with Jodie’s Doctor. Alongside them, we’re delighted that Sharon D Clarke is also joining the show."

Jodie Whittaker says: "I am so excited to share this huge adventure with Mandip, Tosin and Bradley. It's a dream team!"

Bradley Walsh says: “I remember watching William Hartnell as the first Doctor. Black and white made it very scary for a youngster like myself. I was petrified but even though I’d watch most of it from behind the sofa through my fingers, I became a fan. I then queued up for ages to get into the Carlton picture house in Watford to watch the great Peter Cushing appear as the Doctor in a full-length feature film made in glorious color. Am I thrilled to be part of this whole ground breaking new dawn for the Doctor?? Oh yes!”

Mandip Gill says: “I am over the moon to be joining the Doctor Who family. This is an iconic show with an amazing fanbase and I look forward to everything that brings. Certain roles seem unattainable and this is one of those, so much so I didn't believe it to be true for the first few weeks. To be working alongside the likes of Jodie, Bradley and my old friend Tosin is thrilling. This show is worlds away from the work I've done previously and that's the part that excites me the most.”

Tosin Cole says: "I'm grateful and excited to be a part of this journey with the team. I'm looking forward to jumping in this Doctor Who universe."

Matt Strevens, Executive Producer, BBC Studios says: “I am thrilled to welcome Bradley, Mandip and Tosin to the new Who family. Working with three such talented actors is going to be a lot of fun. The Doctor is in fine company.”

Piers Wenger, Controller of BBC Drama says: "The casting of Mandip, Tosin and Bradley is a mark of the new creative ambition Chris is bringing to Doctor Who. He's already made history with the casting of Jodie. These three new characters complete a new and utterly unmissable team aboard the Tardis."

Sarah Barnett, President of BBC AMERICA, says: "Doctor Who fans in America are in for an exhilarating ride as the Thirteenth Doctor and her new friends begin a quite amazing new chapter.”
Posted by DR5WHO at 9:27 AM