Details for Doctor Who Magazine 518 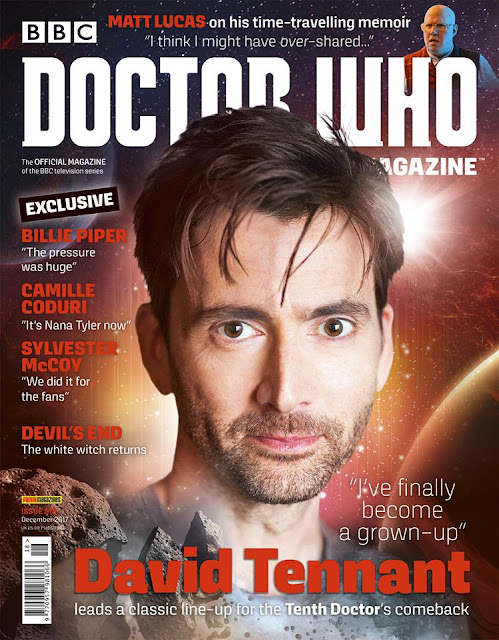 Out today in the UK is Doctor Who Magazine 518 and the big feature is an interview with David Tennant and Billie Piper and the also the second part of the Sylvester McCoy Interview.

THE TENTH DOCTOR AND ROSE ARE BACK! ISSUE 518 OF DOCTOR WHO MAGAZINE CHATS EXCLUSIVELY TO DAVID TENNANT AND BILLIE PIPER!

Over a decade on from their time together in the TARDIS, David Tennant and Billie Piper are back for a series of Doctor Who audio adventures featuring the Tenth Doctor and Rose…

“An audio recording’s very different to filming a bit of TV – but the vibe is the same, and the characters are the same.” (David Tennant)

“It’s like when you hang out with an old friend who you haven’t seen for years, and then loads of stuff has happened between you, but it’s sort of just like you’re immediately there again. I love it.” (Billie Piper)

MATT LUCAS
We talk to Matt Lucas about his new autobiography, which he wrote while playing Nardole in the latest series of Doctor Who.

CAMILLE CODURI
Camille Coduri, who played Jackie Tyler, tells us what it’s like to be reunited with David Tennant and Billie Piper for more Doctor Who audio adventures.

WHITE WITCH OF DEVIL’S END
We meet the people behind a DVD sequel to the classic 1971 story The Dæmons.

BOX OF DELIGHTS
An interview with Paul Foden, the fan whose home-made TARDIS recently appeared on Channel 4’s Amazing Spaces: Shed of the Year.

MATILDUS
A brand-new comic strip adventure for the Doctor and Bill in Matildus, written and illustrated by Scott Gray.

THE TIME TEAM
The Time Team continues its mission to watch every episode of Doctor Who with 2011’s The Rebel Flesh.

PLUS…
Previews, book and audio reviews, news, the Watcher’s column, prize-winning competitions and much, much more!