Goodbye to 12 - Doctor Who - The Magician’s Apprentice Review 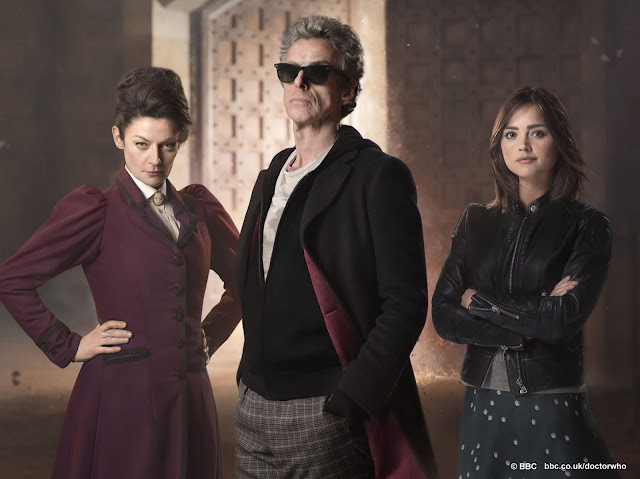 Doctor Who:
The Magician’s Apprentice
By Steven Moffat

After months of speculation and rumors since Series 8 has ended The Magician’s Apprentice has arrived and series nine has now begun in earnest.  The episode opens up with a child who happens to have wandered into an area where there are hand mines and is trapped and can’t get out.   The Doctor soon appears and tries to help the child from the trap until he learns the name of the child.  He then leaves the child to his fate and leaves in the TARDIS. 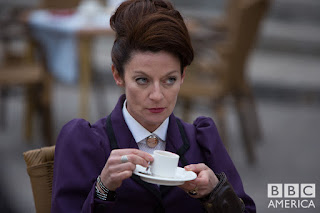 We find out that the child is named Davros and all the mystery that we were exposed to in the prolog and the prequel have now come to fruition and we now know that Davros is the one behind what The Doctor is running from.  This was the great jaw dropping moment of the episode and surely one of the biggest surprises in the shows history.  Sure we had the whole Missy reveal of being The Master last season but we had a whole series to come up with theories of who she was and must of the fans were right.  But the reveal that the boy running in the battlefield was Davros was a pretty good surprise and wanting to see what happens next was high priority.  It’s too bad we had to sit through some really silly stuff to get to the confrontation.

I really liked how The Magician’s Apprentice started.  With the whole reveal and then with Missy asking for Clara and UNIT’s help to find The Doctor.  That was pretty good and I really liked how Missy knocked Clara down a peg.  She need to be as she just came across to bossy and a know it all.  All of a sudden she became super Clara and was able to figure out technology to find The Doctor.  Best line of that Missy and Clara exchange was that she was the puppy.   I did like the chemistry Michelle Gomez and Jenna Coleman has.  It worked really well and made the whole search of The Doctor all that more entertaining especially when they were on the top of the castle wall watching The Doctor making a fool of himself. 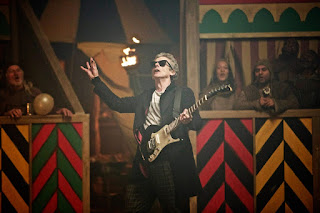 This brings us to the part I’m just not so sure about.  The whole  party for The Doctor just seemed to silly even for Moffat.  Really a tank and playing the electric guitar in 1100’s England.   It just didn’t seem all that funny.  For one who is driving the tank and where is the amp getting electricity from to power itself?  I’m sure diehard fans will come up with a way he did it by making a remote control for the tank and jury rigging the tank’s power supply to power the amp.  Yes in theory I guess he could have done this but was it really necessary.  The story was pretty good at till this point with Missy not being way over the top but that whole sequence of the party until Colony Sarff shows up in all his snake goodness.

Now I thought Colony Sarff was pretty cool.  I enjoyed seeing this creature slithering around asking people where The Doctor was.  I enjoyed seeing the reveal of what he was and seeing all those snakes appearing wreaking havoc.   But there was a problem with all that.   If Bors was a Dalek agent and spent three weeks with The Doctor why did Davros have to send Colony Sarff to find him?  I mean I’m sure Davros knew this as he would have access to the Daleks computers as he is all powerful so why send the snake guy?  They obviously knew where he was since one of their agents was there.    Unless the snake bite transformed Bors into a Dalek agent.  Then does that mean the snakes are really a Dalek creation?  Who knows I could be overthinking this part and it is a minor thing anyway. 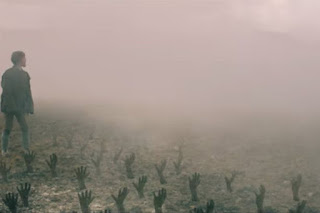 I really liked the confrontation between The Doctor and the dying Davros.  It seemed like a game of chess with both of them not revealing their winning move.  Davros did seem to have the upper hand on The Doctor.  I did like seeing all the old encounters with Davros on the screen in the room. From Davison voice to the unlimited rice pudding speech it was all there.  I love when the new series uses the classic series it is always nice to give a nod to the past to help people remember it and hopefully go back and watch those stories.   Speaking of The Magician’s Apprentice has a lot of influence from Genesis of the Daleks.   Davros has used The Doctor’s words against him and turned the table as we are to believe that The Doctor did eventually save Davros or Davros somehow escaped from the hand minds.  He uses The Doctor’s compassion against him and we will see what happens in The Witch’s Familiar.

Michelle Gomez was great as Missy especially when it was revealed they were on Skaro.   The look of horror really sold the reveal and you got a feel of the danger they were in.  She quickly changes when Clara and she are face to face with all the Daleks and she tried barging for her life which did not work.  This scene was made more for shock value as I doubt Missy and Clara were killed by the Daleks and I highly doubt the TARDIS was destroyed.   This will lead to a lot of conversations on Twitter and in Facebook groups which isn’t a bad thing for the show.   I didn’t mind this as we know they are not dead but The Doctor doesn’t and it is a good way for Davros to get at The Doctor.  This brings us to Peter Capaldi as he is so good at looking shocked and in horror.  His expressions while talking to Davros really made the last part of the story and really sell the cliffhanger for the conclusion. 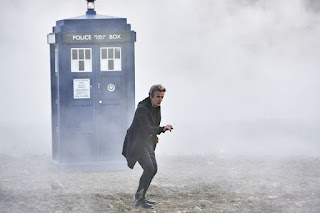 The Magician’s Apprentice was a really good opening story that did have some surprises that I wasn’t expecting.  For one the confession dial which will open up when The Doctor is dead.  Who knows where that will lead?  I did enjoy most of the story as it caught my interest and I’m really looking forward to what happens next in The Witch’s Familiar.  It really did set things up very nicely but what is with the episode titles.  I’m sure we’ll find up in the next episode.  I did not like the silliness like the 3d Missy head coming out of the view screen but that is the overly cuteness that Moffat likes and most of us roll our eyes to.  The Series seems to have started off well and I am hoping Steven Moffat does not screw it up with the second part like he does way too often.
Grade B+