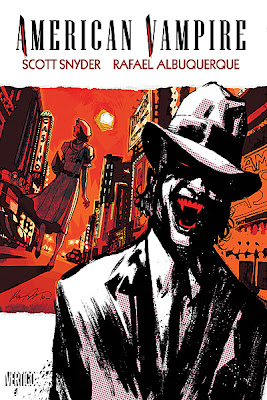 Continuing with the story of Skinner Sweet and Pearl American Vampire Volume 2 contains two stories and collects issues 6 – 11 of the ongoing comic book series.  The first story involves Skinner Sweet in Las Vegas in 1936.  There Skinner is a big mob boss in Sin City and he’s gotten up the crawl of Las Vegas Police Chief Cash McCogan.  Of course there are vampires involved and someone is pecking off certain members who lowballed the bid on the Hoover Dam and went into business with the vampires.  Thus bringing the mayhem to the city on the up rise that is Las Vegas.

The second story involves Pearl and Henry as they try to live a quiet life away from vampires and Skinner Sweet.  But Pearl who is one of The American Vampires is always on the lookout for anyone who might be coming after them.  Especially The Vassals of the Morningstar who hunt and kill vampires and the come to Pearl to ask her how they can kill American Vampires so they can use that info against Skinner Sweet.

Not to give too much away you can guess what ensues next.  Yes lots of violence and action that you have come to expect with American Vampire.  Scott Snyder gives us a pretty good Skinner story and also sets up a good story for Pearl and Henry that gets more attention in Volume 3.  I love the new characters that were introduced in Volume Two like Cash Morgan.  He is a pretty cool character and you really feel for him at the end considering what Skinner does to his pregnant wife.  The Skinner Las Vegas story was the better of the two stories as it had more action and well more blood and killing of vampires.

I did enjoy the Pearl and Henry story as it is building up to something.  They are being followed and on the run and you feel like at some point someone is going to capture them.  I like how Scott Snyder is taking his time with Pearl as you get to know her a bit and you actually get a sense of what Pearl and Henry want.  They want to live a happy life and to be left alone from the vampire hunters and the vampires.

American Vampire Volume 2 is a good collection with two stories that are pretty enjoyable and full of vampire violence for the diehard horror fan.  What is exceptional is the smart story that Scott Snyder weaves as it is apparent that he is planning something major.  You get the feel that the way the story is being told is that American Vampire is a story with a beginning a middle and an end and that the beginning has got me hooked to find out what happens in the middle.
Grade A