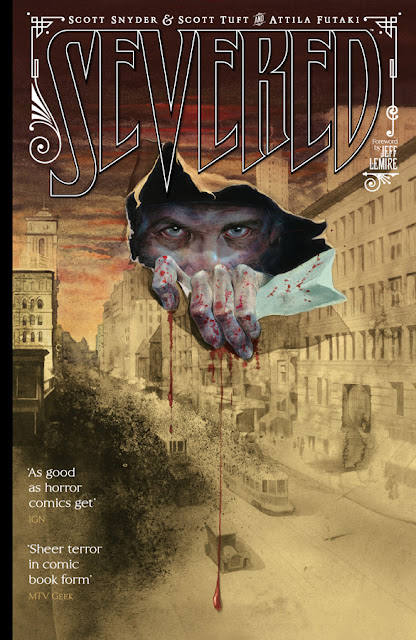 While looking for something new to read in the world of comics that isn’t in the super hero vein as, well, to be quite frank I’ve been getting a bit bored with super hero comics as the writing on a majority of them have been pretty stale and did not really interest me all that much.  Not all of them mind you.  There are some books out that have been very good and very well written that makes your gray matter do brain exercises.  On the advice of @Spaced4SimonPeg I picked up and read Severed by Scott Snyder and Scott Tuft and, well, what a story they did spin out of their very warped imagination.

The story is centered upon Jake Garron who runs away from his home in search of his father.  Jake found out he was adopted and is determined to find him.  He hitches a ride on a train where he befriends Sam.  Sam knows the ropes and helps out Jake who is only 12 years old and very naïve about the real world and dangers of 1916.  In Chicago Jake and Sam come in contact with an old man named Alan Fisher who seems too keen to help them find Jakes dad.   The problem is Alan Fisher has a dark secret.  A secret that will turn out to be a very deadly thing as Alan Fisher isn’t what he seems to be.

Severed was a very intense read.  Right from the first page the story sunk its hooks into me.  In fact the first part really set everything up really nicely and set the feel for the entire book which to me was really creepy and scary.  What makes it so creepy is that the creature in the book is hunts down orphans who have big dreams and then eats them.  Now if you are a parent this will truly freak you out.  Imagine something eating children and then hunting and befriending another one and then bam he eats that kid too.  Really scary stuff but even still I kept reading to see what would happen next. 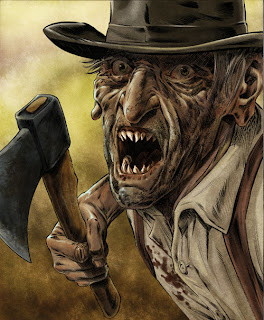 I just enjoyed the way the whole story unfolded.  A great piece of storytelling is Severed and its pace was really good as the scenarios built up nicely for the conclusion.  I liked how the authors told the story and made you squirm as you knew Jake was with the monster and you were wondering if he would figure it out in time.  I liked that this book was scary and found it refreshing that comic books can be scary and also tell a story that is entertaining and intelligently written.  The book defiantly had a Stephen King feel to it as the main protagonist reminded me a bit of IT.

The art by Attila Futaki really captured the atmosphere that was conveyed by the authors.  It really helped to tell the story as the art made the whole story that much scarier.  It really was a darker story and the art of the book was in a sense just as dark.  The art really complimented the story very nicely and just made the whole reading experience all that more enjoyable. 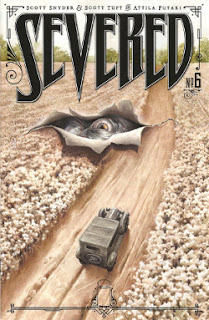 So if you are looking for something different and something in the horror genre or you just want a good scare then Severed is a trade you should pick up.  Severed is a well written collection of the comic book miniseries and you will enjoy it if you enjoy horror stories. I highly recommend this book and hope if you do take my advice I hope you enjoy it as much as I did.