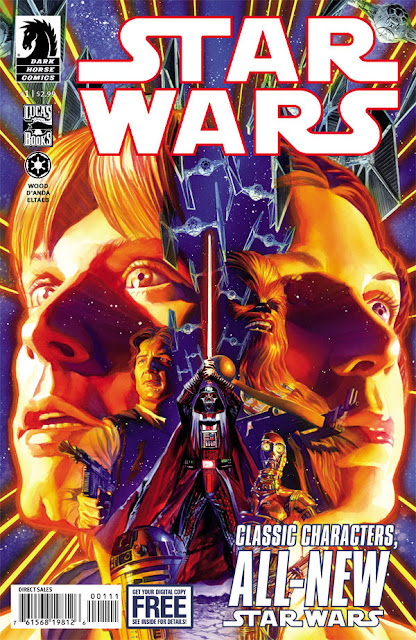 Dark Horse Comics has returned Star Wars back to the glory days of Star Wars comics by starting over more or less.  They have gone back to where Star Wars comics got their start by giving us stories that take place after Star Wars Episode 4 A New Hope.  The first issue is out today and I have to say that Star Wars fans old and new will be really happy with the issue that Brian Wood and Carlos D’Anda have given us.

I like the story so far as it takes place not that long after the Battle of Yavin and the destruction of the Death Star.  I like how it deals with the ramifications for everyone involved in that battle and what the characters are dealing with.   For instance Darth Vader is dealing with the shame of being defeated and allowing the Death Star to be destroyed.  For this he loses command of his Star Destroyer and is sent on a mission.  This is pretty awesome as I have always wondered what happened between the two movies.

What I also like is that this book reminds me of the Star Wars comics I used to read as kid and which is now available in trade paperback by Dark Horse Comics.  It really had that same feel and excitement for me as Brian Wood really captured the spirit and feel of the Star Wars universe.  The story is really interesting and grabbed me in right from the first page.   The art by Carlos D’Anda really complimented the story and was very stunning to look at mainly when you were looking at the spaceships like the tie fighters and x- wing fighters.

Star Wars issue one was a great beginning to this new series and I will be definitely be putting this comic book into my pull list and will be looking forward to reading what Brian Wood comes up with every month in Star Wars.