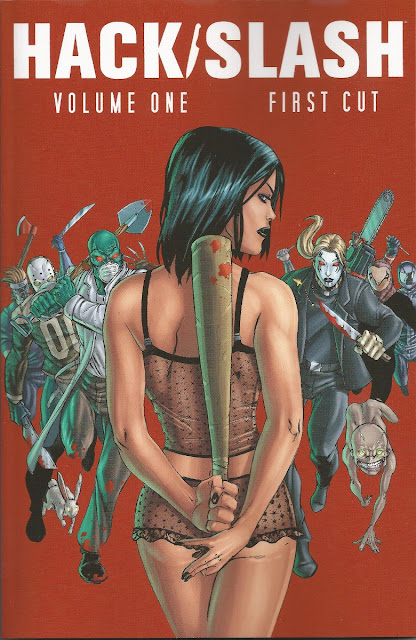 While still on my quest to find alternative comic book series that shy away from the norm of the super hero stagnation I received another recommendation from @Spaced4SimonPeg and this time she suggested Hack/Slash.  Hack/Slash is about Cassie Hack. Cassie is that girl that survives the horror movie.  In her case it was her mother who ended up being the slasher and after she offed her mom she took on the job of killing slashers and saving potential victims.  She is joined on this quest of hers by her friend Vlad who wears a mask to hide his disfigured face.

First Cut is the first 3 one shots by writer and creator Tim Seeley and they are titled Euthanized, Girls Gone Dead and Comic Book Carnage. The stories are really good and if you like old time slasher movies like Halloween and Friday the 13th then you will be at home reading this book.  I really did enjoy reading First Cut as I found the stories to be fun and entertaining and in fact I read this in one sitting.   I liked how the characters interact with one another and how they have no problem taking out the slashers in a very violently way.

My favorite of the stories was Comic Book Carnage mainly because it took place at a comic book convention and since I’ve been to so many, particularly the one depicted here that takes place in Philadelphia, that it had a certain connection for me.   What was funny were the cameos by famous comic book people who this particular slasher does kill.  Kinda funny once you read this and see who they are.

Hack/Slash First Cut is an excellent introduction to the world of Cassie and Vlad and the slashers they hunt.  If you enjoy horror and slasher movies then you will enjoy this book.  It is well written and takes its homage to the horror/slasher genre seriously and at times humorously as there are quite a bit of funny moments to go along with all the gore. So if you’re looking for something a little bit different and out of the ordinary then take a chance with Cassie Hack and Vlad and their stories in Hack/Slash The First Cut and get hooked on this comic book like I did.