Doctor Who Voyage To The New World Review 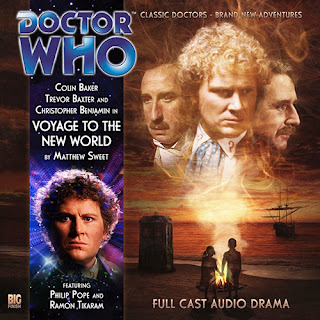 Doctor Who: Voyage To The New World

Picking up where Voyage to Venus left off The Doctor, Jago and Lightfoot have now been captured by the natives of the new world.  While captured Jago seems to be seeing children and the troubling part he is the only one.  It appears Jago is being haunted by ghostly children and it is driving him mad.  Plus there is a mystery going on that has The Doctor troubled.  A mystery about the island of Croatoan and it could cost Henry Gordon Jago his life.

I just couldn’t get into Voyage to the New World.  While Voyage to Venus used one of the try and true Doctor Who themes for that story New World did not and tried to be different.  To me it just seemed to be something I couldn’t see as Doctor Who. I did like the ideas of the Ghostly Children and what they were all about.  What I did not like was that the TARDIS was used in a way that I couldn’t see it being used.  I just found it really hard to believe that Sir Walter Raleigh could operate it or at least figure it out. It just was not very plausible for me.

Still it wasn’t all that bad as the chemistry between the main three actors was really a delight to listen to.   Colin Baker puts in another wonderful performance as the 6th Doctor and it is always good to hear his Doctor as you get a hint of what could have been every time you listen to one of his audios.   So Voyage to the New World just didn’t tickle my fancy and but did give some good moments but not worthy of a repeat listening.